I ran my first duo dungeon at the weekend, and it was hilarious. As a teaser to the hilarity I managed to get one of my friends to say the word Monkey about 50 times in the space of roughly 30 minutes.

So the dungeon that I ran was a combination of some of my own ideas, the room layout from a dungeon I bought years ago and some excellent ideas I found whilst trawling the net.


Gallason (bard) and Kaldoran (barbarian) have been invited to meet up with Gallason's uncle, Lymbal Methis Amrùnor, at a nearby tavern in the North Ward of Waterdeep. This area is quiet and populated by most of Waterdeep’s wealthiest middle classes and lesser nobles. The PC’s are asked to meet Lymbal at the well known tavern called The Misty Beard, he has asked for their presence as he is performing a recital of his best music and would like his favourite nephew to attend.


What Gallason doesn’t know is that the invite that he has received is actually from a Mind Flayer who has captured and imprisoned Lymbal due to a debt that is owed. The Mind Flayer, Yalhzha Rus-Us,has taken Lymbal as a prisoner because Yalhzha believes the elf owes him money for a performance that he did not complete at The Misty Beard. Now to pay off the debt, Yalhzha has decided that Gallason and friend will provide the much needed entertainment.

As part of the lure to get the players to the Tavern, Gallason will receive the following letter:

It has been some time since we last shared a story and the sound of a finely tuned lyre together, so to remedy this situation I am inviting you to a private recital that I am performing at The Misty Beard tavern in the North Ward of Waterdeep, I have included a map.
The tavern is an old haunt of mine and I have been asked by the owner to perform a number of my less bawdy tales and songs for some hand-picked patrons. As part of the deal I requested that I could invite you and I have also wangled an extra ticket in case you have some long haired, athletic maiden to bring along as well.

Anyway I must dash, there are instruments to tune and stories to rehearse before the performance, I’ll see you tonight at the above location and don’t forget to wear something smart.

P.s. some of the patrons or staff might seem somewhat unusual, but this is Waterdeep so try not to stare too much. Start time is early evening so bring some nice pipe weed.

When the adventurers arrive at The Misty Beard it will be early evening and the streets will be fairly quiet with the exception of people who are out for the evening looking for entertainment.

The front door of The Misty Beard is staffed by a rather large Ogre called Gruff and a small Pseudo-Dragon called Fluff. Fluff will do all of the talking and as soon as Gallason announces who he is then he will gain entry.

Read the following description regarding the interior of the tavern:

“This clean, well maintained tavern has a warm and welcoming interior despite that fact that it is lit in a dim glow or oil burning lamps. The majority of the tavern seems to be a hodge, podge of private booths, tables and standing areas that all seem to be filled with all manner of creatures. The tavern is busy and it is hard to discern who is working in the tavern and who is there for the entertainment. Across the room from the front door you can make out a large stage and to the right of the stage is the bar.”

After a few moments of looking or moving through the crowded tavern the PC’s will finally see Lymbal, he is sat near the bar in a private booth and seems to be in deep conversation with a Mind Flayer. As the party approach the Mind Flayer will cast a watery, pupil-less eye in their direction and move away. If anyone from the party actively seeks to see sight of the Mind Flayer then they will have to make a DC13 Wisdom(Perception) check. Anyone who passes will notice the Mind Flayer moving behind the bar and out through a door.

The PC’s can make small talk with Lymbal but this is not Lymbal, this is a programmed illusion of the Bard and is being controlled by the Mind Flayer who has just left. He will control the illusion with great skill and be able to project his thoughts via a voice like to the illusion so that he can answer some questions that the party will ask. However after less than 5 minutes of talk it will become clear to Gallason that something is wrong, get him to make a DC 15 Insight check, if he passes get him to make DC 10 investigation check with advantage. When he passes he will know immediately this is an illusion and the if he makes this discovery obvious then the image will vanish. In place of the illusion will be a rolled up scroll, that reads as follows:

“Friend, do not be alarmed, speak to Vanish the Pseudo-Dragon behind the bar. Tell her that when the sea is high the mermaids come out to play. She will understand what this means.

We have much to discuss regarding your thief and liar of an uncle.

As long as the PC’s recite the phrase above to Vanish then they will gain entrance to the back room where Yalhzha is waiting for them.

From here the dungeon starts in earnest, I haven't noted down all of the dungeon as I had a lot of it "written" in my head but I have posted pictures below of what happened and a quick overview of the dungeon rooms and layout.

Room 1.
Entrance room.
Description:
Before you stands a 50-foot tall door, forged from some black metal that you are unfamiliar with. As its base is a series of nine locks arranged in three rows of three. The locks are numbered 1-9. Worked into the door’s frame are enormous sculptures of squid headed humanoids. In addition to this large door there is a smaller door to your left and an open door way to your right. The door to your left, which is closed, has three locks on it, numbered 1-3.

“The basic idea of the dungeon is for the PC's to solve all of the puzzles and defeat the required monsters to collect all 9 keys that will let them through the large 50-foot tall dungeon. ”

Room 2.
The Mirrored Key.Description:The room ahead is bare of furniture, but two mirrors hang on the walls across from each other. A silver key is reflected in each, hanging in the centre of the room, but you cannot see anything where the key should be to cast a reflection. The only other object in the room is a heavy, ornate rug that lays in the centre of the room.

“To collect this key the players will have to place the rug over the mirror south wall. Doing so will make the real key appear in the centre of the room - this correct key will have be inscribed with a 1. If the rug is placed over the mirror on the north wall then a false key will appear but this will have a backwards 1 inscribed on it.”


Room 7.
The Organ Grinder.
Description:
A pedestal occupies the centre of this room. Resting on top of it is a silver key with the number 6 inscribed on it. Surrounding the pedestal are five statues with raised spears. The floor is tiled in a checkerboard white and black pattern. Lastly, there are small red crystals spaced evenly about the room, inset into the floor between the tile.

“This room is not trapped and there is no trick or puzzle to solve, the party can quite simply walk up to the pedestal and retrieve the key. However the room is completely covered in an anti-magic field, so it will seem like there is a trap and this will keep the party busy for quite some time.”


Room 8.
The Long Walk.
Description:
The door opens and ahead of you stretches a very long corridor, it must go at least 200 metres and for those will excellent vision you can make out a small key floating in mid air at the end of the corridor.

“Room in puzzle house should consist of a long corridor where the PC’s can see a key, if they walk forward down the corridor it will just expand and continue on and on, with no end in sight and no way of getting the key. However if the PC walk down the corridor backwards then they will abruptly feel the back wall of the corridor and the key will be presented in front of them, suspended in mid air.” 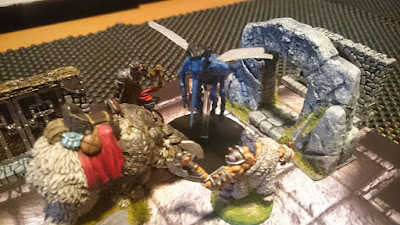 Room 10.
Monkey see, monkey do.
Description:
Ahead of you is a room but this one, unlike the others, has only the door that you entered through. Standing in the middle of this room is another large stone archway. Written in common over the doorway is the word “Monkey”. As you enter the room a portal within the archway opens and a loud booming voice says, “Hello, what’s your name?”.

“The door will greet the players when they arrive and converse with them like any NPC. The trick here is that the players aren't the ones that have to say the password, the door is. They have to get the door to say it. Once the door has spoken the word, then the last key will appear.”

Quick update of some pictures of a new Beholder/Eye Tyrant/Globe of Eye Evil model that I purchased from Otherworld Miniatures.

These are very cool miniatures, really well molded and they all have a old school look to them which is nice and nostalgic. 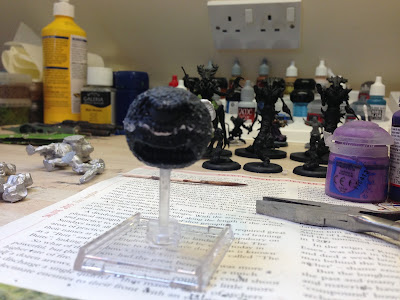 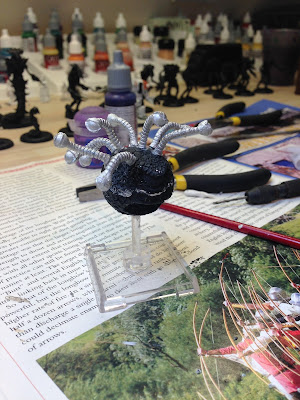 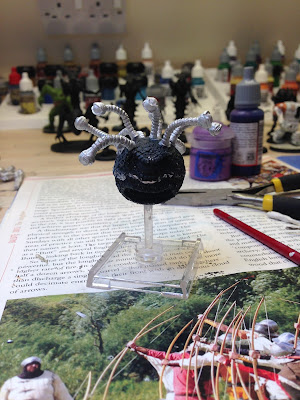 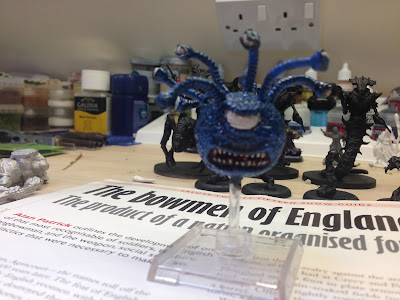 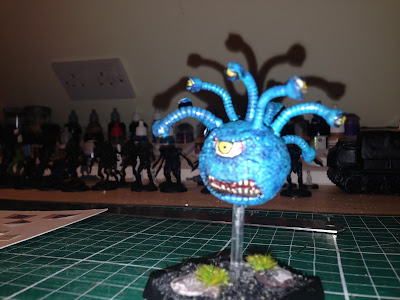 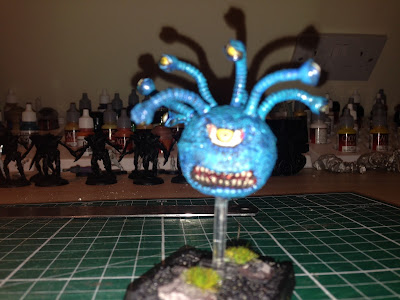 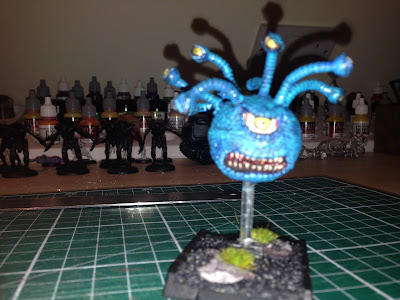