Hoard of the Dragon Queen - Briefs emailed to players

The roll call for the Hoard of the Dragon Queen dungeon will be as follows.
(Dungeon date will be the 03/01/2015)

For a number of weeks now the two of you have been travelling through the untamed wilderness to the East of Baldurs Gate known as the Greenfields.

You have heard that a band of marauding bandits have been pillaging and stealing from small towns and villages a few days travel from where you are. So you have decided to take some paid work escorting a caravan of supplies that is heading in the direction of a small town called Greenest.

From here you will take your pay and then leave the caravan to hunt down these vicious marauders.

As well as hiring you two for this trip the caravan master has also hired the aid of a few other mercenaries, some of which you have started to strike up a friendship with.

Amongst these mercenaries are a savage Human Warrior and a preening Elf Bard, the barbarian is quiet and seems to be troubled by something, you have noticed on a few occasions that he has woken abruptly around the camp fire as if some dream is bothering him. As for the elf, well his songs make the trekking through the day and cold nights pass quicker, but how will he fare in a dangerous situation?

The journey to Greenest will take several days and as Autumn turns to Winter you start to feel the icy chill of the North Winds bearing down on you, this seems unusual as you are so far South. Maybe this is a portent for cold and hard time to come?

​Days have turned to weeks and quickly this time has become months, but the anguish that you feel for the destruction of your village still burns deep inside your heart.

You have travelled a great distance from the North and every day has been a constant reminder of the life that was taken from you. Around every copse or hill is another thriving, rural town of village where families enjoy their lives and will hopefully never know the pain that you have witnessed.

Your travels have taken you from the edge of the Spine of the World mountains, across the great open spaces of Faerun and finally you have made your way South East to the open green lands that border onto the great city of Baldurs Gate.

This trek has been difficult but it has become harder recently as your nights have been disrupted by dreams that leave you cold and shaking in the night. Every fifth night for the past month you have been awoken by the same dream. The world destroyed by cold, choking fumes, lightning storms, waves of acid and horrible fire. Each time, the dream ends with ten evil eyes glaring at you from behind the darkness. ​

And as you wake from this dream you are always left with a name or word ringing in your ears.

Through your travels you have learnt that Greenest is a small town that is several days journey East from Baldurs Gate, so you have taken some paid work as a caravan guard for a merchant who is heading in that direction.

As well as yourself the merchant has hired additional help in the form of two large Half Orc brothers. Both seem to have an affinity with nature and make good company around the camp fire. Also travelling with you is a small Elf Bard, you have not met many of the Fey Race before and this one appears to be obsessed with playing some sort of string instrument and singing loudly at all times of the day.

Leosin Erlanthar is a wandering monk who once saved your life.

You will never forget that night in the Druken Kraken Tavern, you'd had far too much to drink and that baudy tune about the Orc befouling the Kobold was probably not the right song to be singing in front of a group of Orc Barbarians.

They were not happy with your song but they were more that happy to slice you from gut to throat and they would have had Leosin not stepped in to save your skin. Whatever he did to fend off the Orcs is just a hazy blur and whether that was because of your drunken state or his prowess with weapons you are not sure.

However a number of days ago whilst you were working in a tavern in Baldurs Gate you learnt that Leosin had gone missing and that his last whereabouts was in a small town called Greenest that is located several days East from Baldurs Gate.

You decide to take some paid work escorting a merchant and his caravan of supplies who is heading to the same town. If Leosin has gone missing then this could be the perfect opportunity to repay that debt!

Travelling to Greenest is boring and cold and you long to be back in a packed, warm and friendly tavern entertaining the patrons and catching the eye of some local lass. At the moment your only travelling companions are two Half Orcs who seem to be obsessed with shrubs and animal dung and a Human Barbarian who rarely talks.

However the Human is of some interest to you, you have noticed on a couple of nights that he seems to be talking in his sleep and you can make out certain words that are repeated every night. These words are kill, fire, death and vengeance.

Before you left your monastery Yung Sei Tei called you into his private meditation room and spoke the following words to you.

"Boy, your journey to enlightenment has only just begun and you have chosen to walk this path alone. I do not condone this path that you have taken but I need to tell you that the road you now walk along will be difficult and full of pain. Beware the ten eyed, purple demon, she walks amongst us in the shadows but her cursed talons will strike soon."

With that Yung Sei Tei falls into a deep meditative trance.

With a heavy heart and more questions than answers you leave the Monastery of the Open Hand and head out into the wild lands not only seeking your sworn enemies but also trying to understand who or what this ten eyed demon is and why her path intersects with yours.

For many weeks you travel though the open green lands of Faerun, every day you pass by another farm settlement or small village. All of which are alive with families happily going about their daily lives. You can't help but wonder would life be easier if you had chosen a more simpler life but you quickly put these thoughts out of your head, if you are not here to stand up against the evils of the world then who will. Through the power of your fist and the inner strength of your Ki you will show all of those who stand against the power of light that their cause is wrong.

Your travels soon lead you into a large area known as the Greenfields, this part of Southern Faerun is famous as a trading route between larger cities and also as a place where many villages and farmsteads are found, the night is drawing in and you are soon looking for shelter as the cold northern winds are chilling, you can feel that winter is on its way but the cold air seems to chill you through to your very soul this evening. As you make your way down a well worn but quiet road you soon see a road sign telling you that a town called Greenest is but a mere 1 mile from your current position. So you decide to head for this town and look for lodgings for the night.

Hoard of the Dragon Queen - The Village of Greenest part 1

Sneak peak of the Village of Greenest. 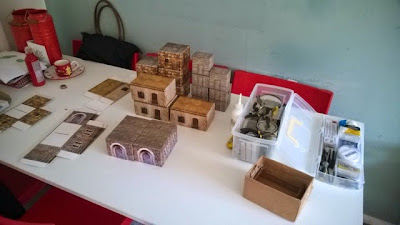