D&D Icons of the Realms - Pegasus

Here is a picture of the D&D Icons of the Realms Pegasus that I picked up a couple of weeks ago, I've repainted, dipped and added new detail to the base.

I think it looks a lot better now. 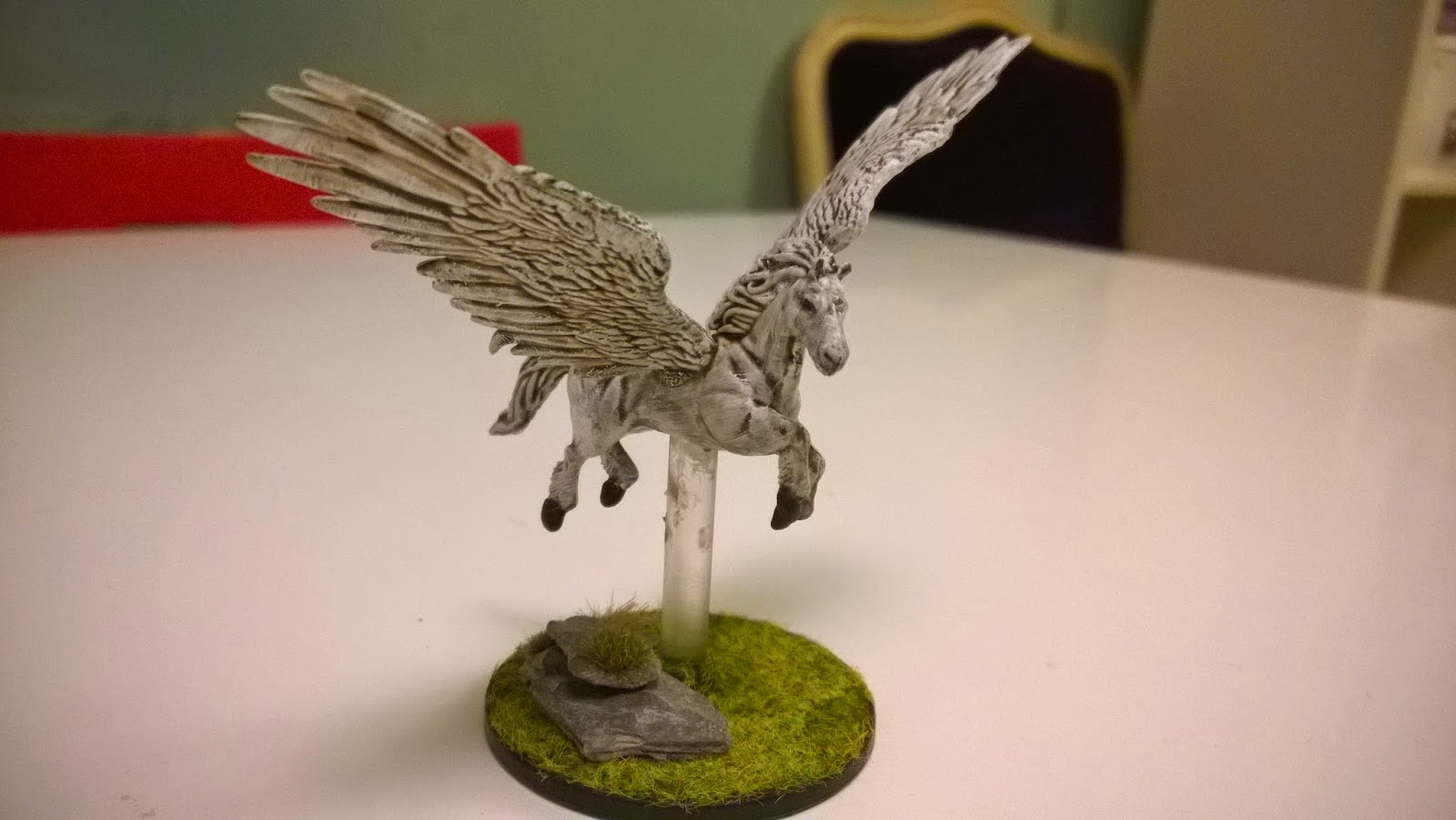 Coming in January 2015 - Hoard of the Dragon Queen 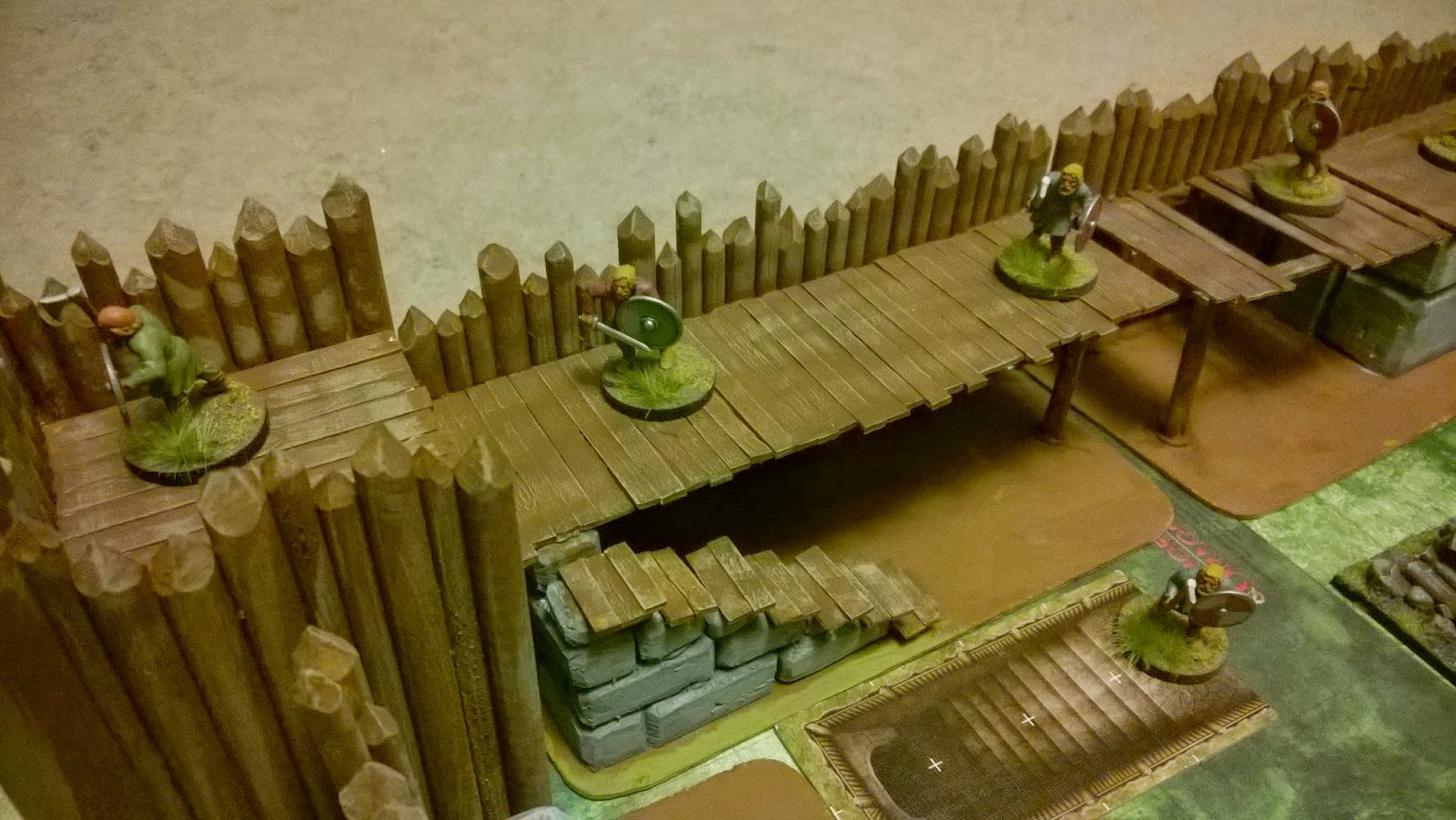 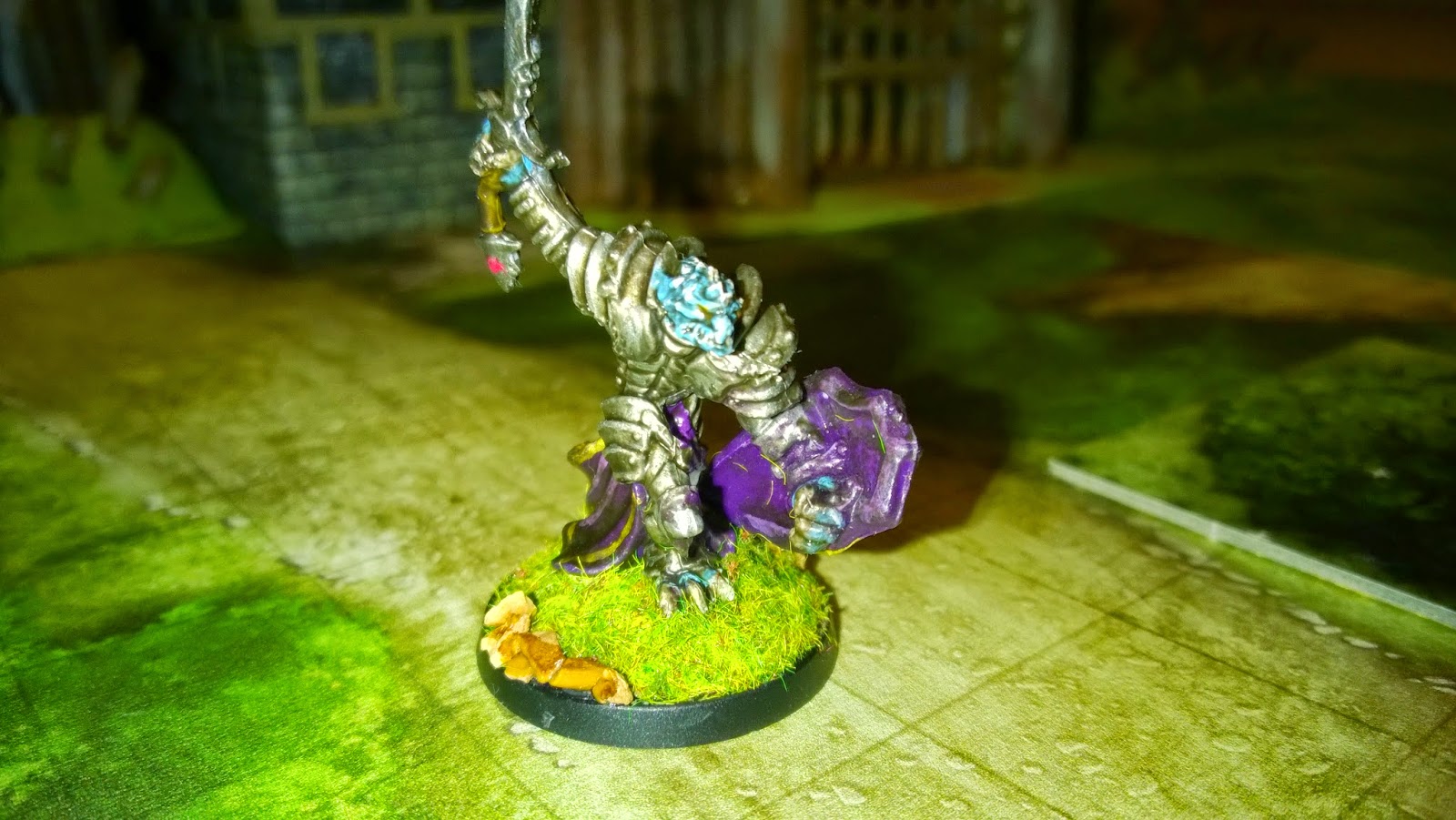 Lost Mines of Phandelver - The End.

And so the final chapter in our first group foray into the world of D&D 5th Edition has come to an end, and what an end it was.

There were Hobgoblins, Undead, Ankhegs, more Undead, Giant Mushrooms that stank and the final fight with Black Spider.

Here are some pictures of the epic dungeon that we played on Saturday, as you can see from the pictures our DM created a huge set piece dungeon from nothing more that a tonne of polystyrene, paint, sweat and love and what can I say apart from that it was amazing.

We started gaming at around 11am GMT on Saturday and we finally finished the dungeon 16 hours later on a early Sunday morning. 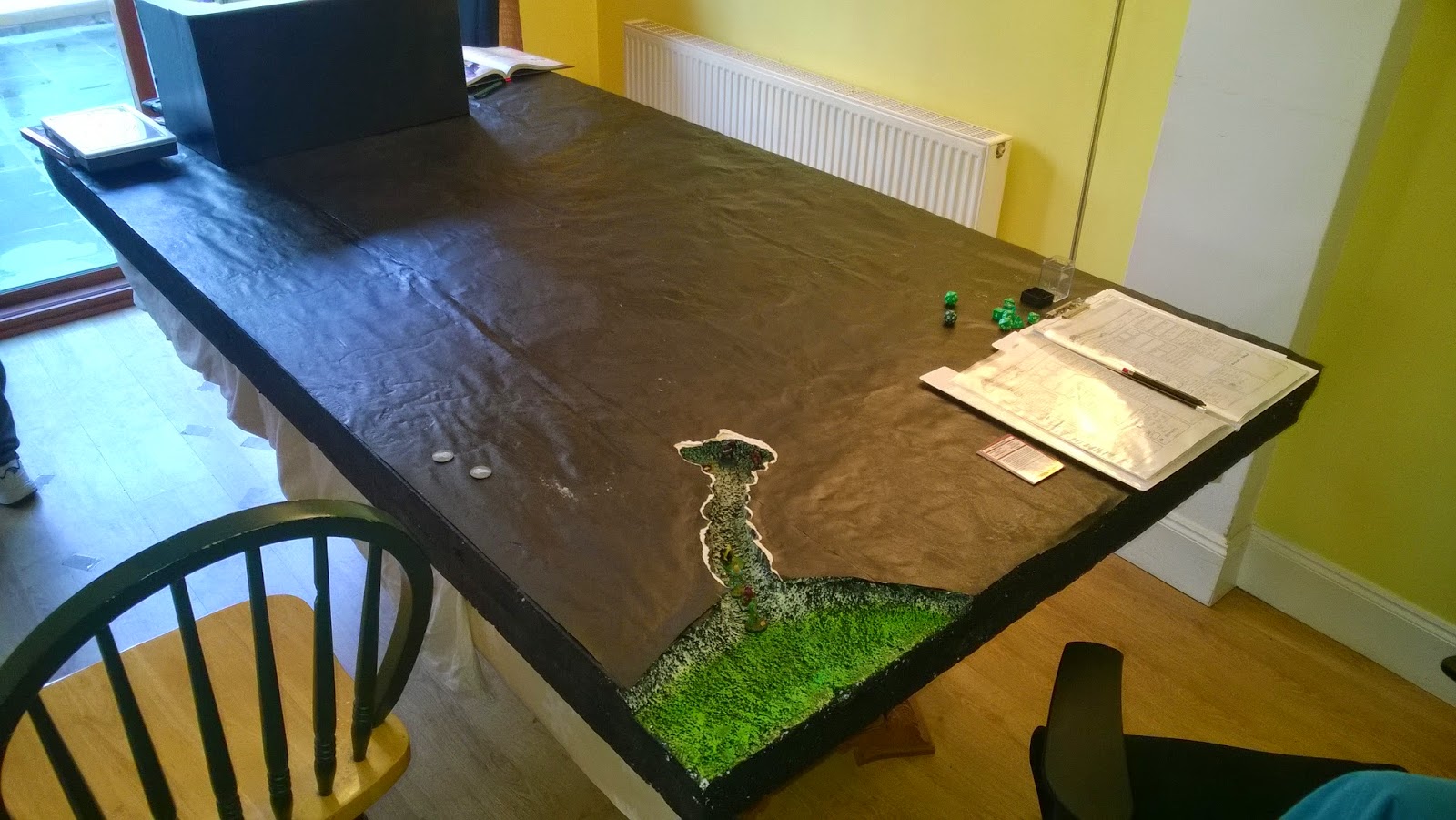 And so we begin, everything looks nice and tidy at this point of the day.
Needless to say by the end of the dungeon and 16 hours later there were a lot more cups of coffee, food wrappers and tired gamers strewn about the place. 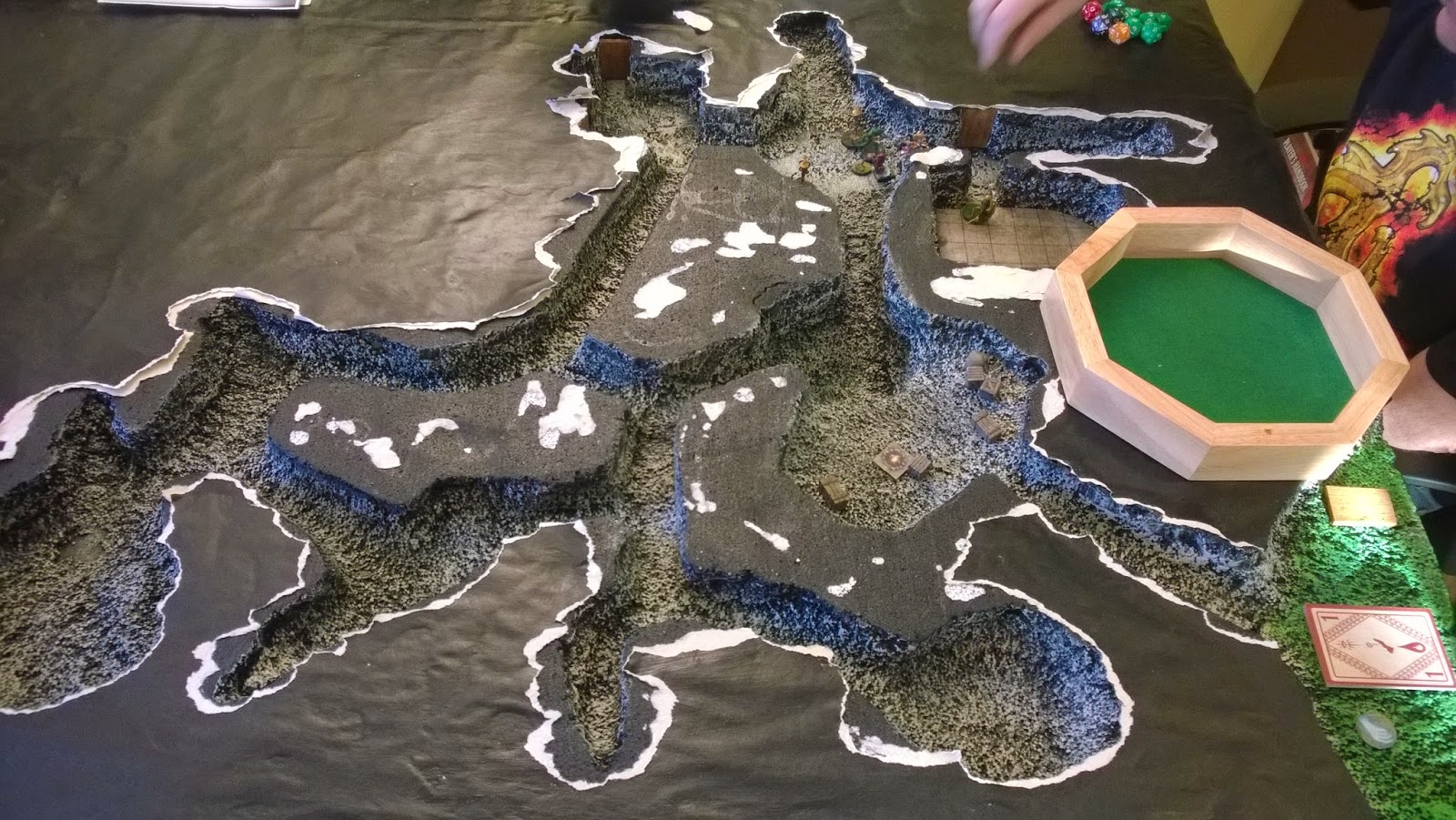 As you can see the dungeon was made from a huge SLAB of polystyrene which was then crafted, ripped, punched into the required rooms, painted and then covered in a top of paper which was then painted black. As we searched each new room our able DM would peel back more of the dungeon "roof" so we could see what was going on. 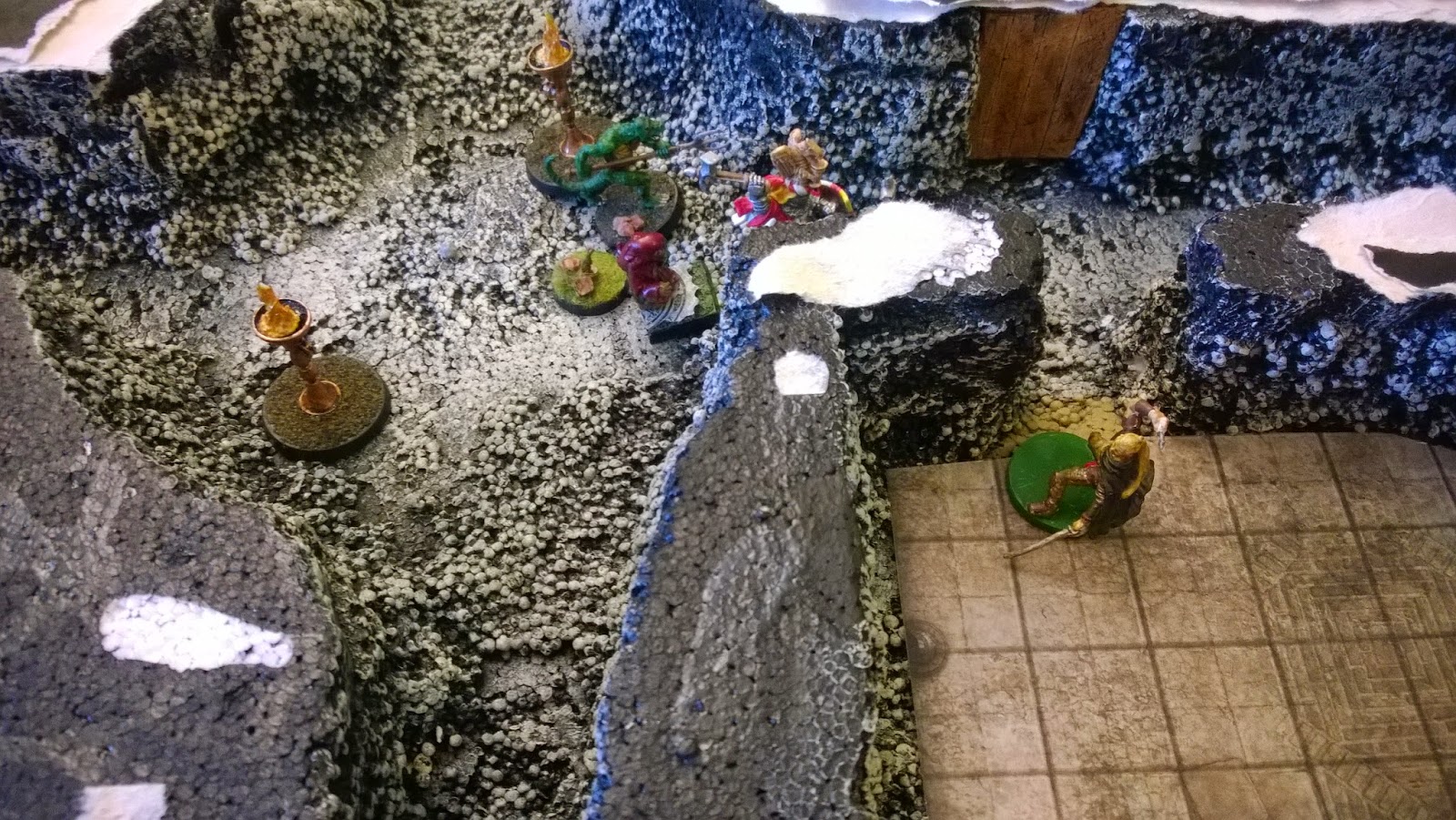 I believe this is a close up of a room filled to the rafters with Dwarven and Orc corpses, once we were in they spring to un-life and tried to beat us to death. 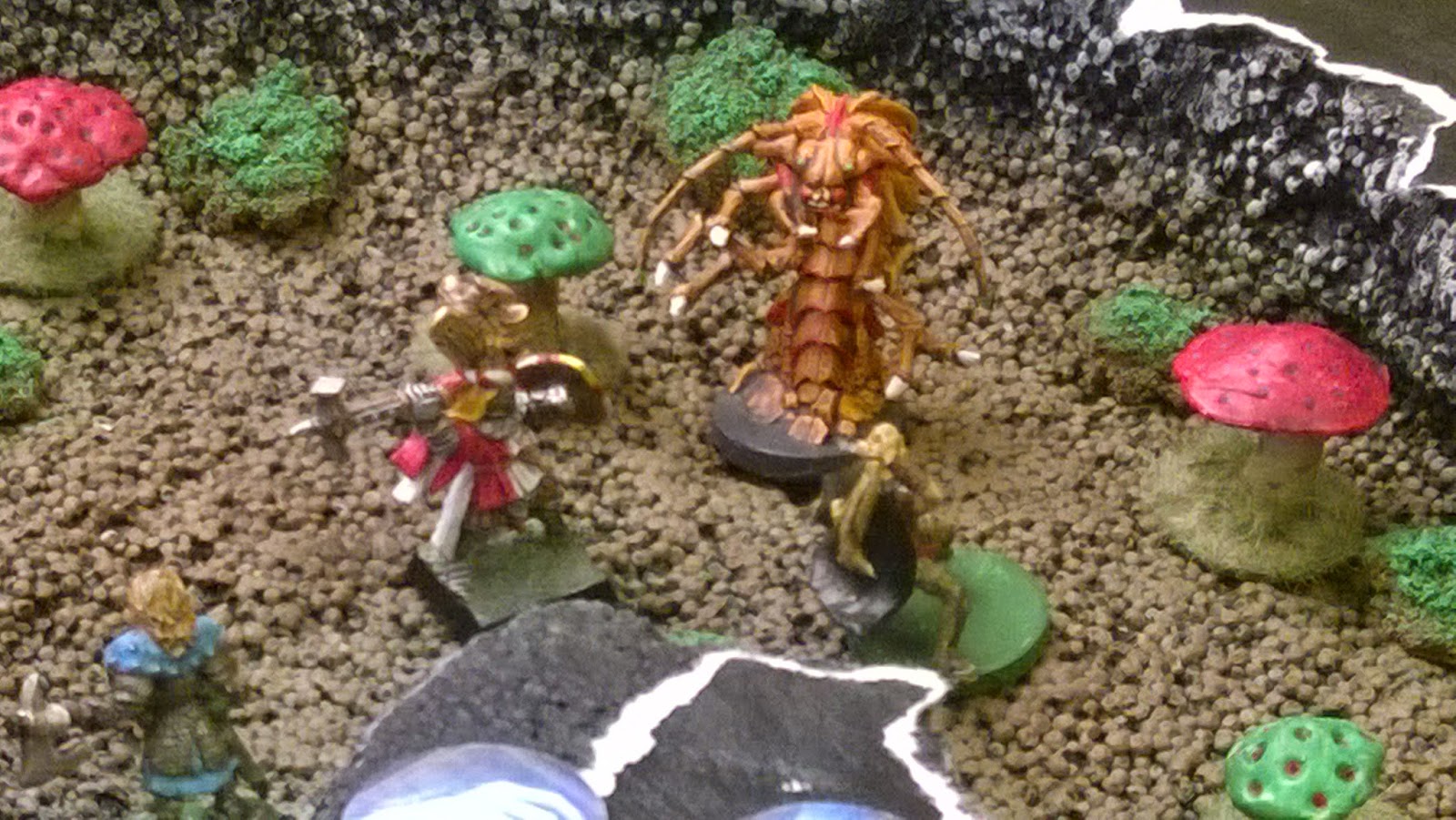 Giant mushroom and sneaky Ankheg room.
This could have been a nasty encounter if it wasn't for the use of a Mage Hand to set off the mushrooms spore attacks before we entered. However saying that, taking on the Ankheg wasn't much fun either, but after the fight the party did find a nice hidden surprise. 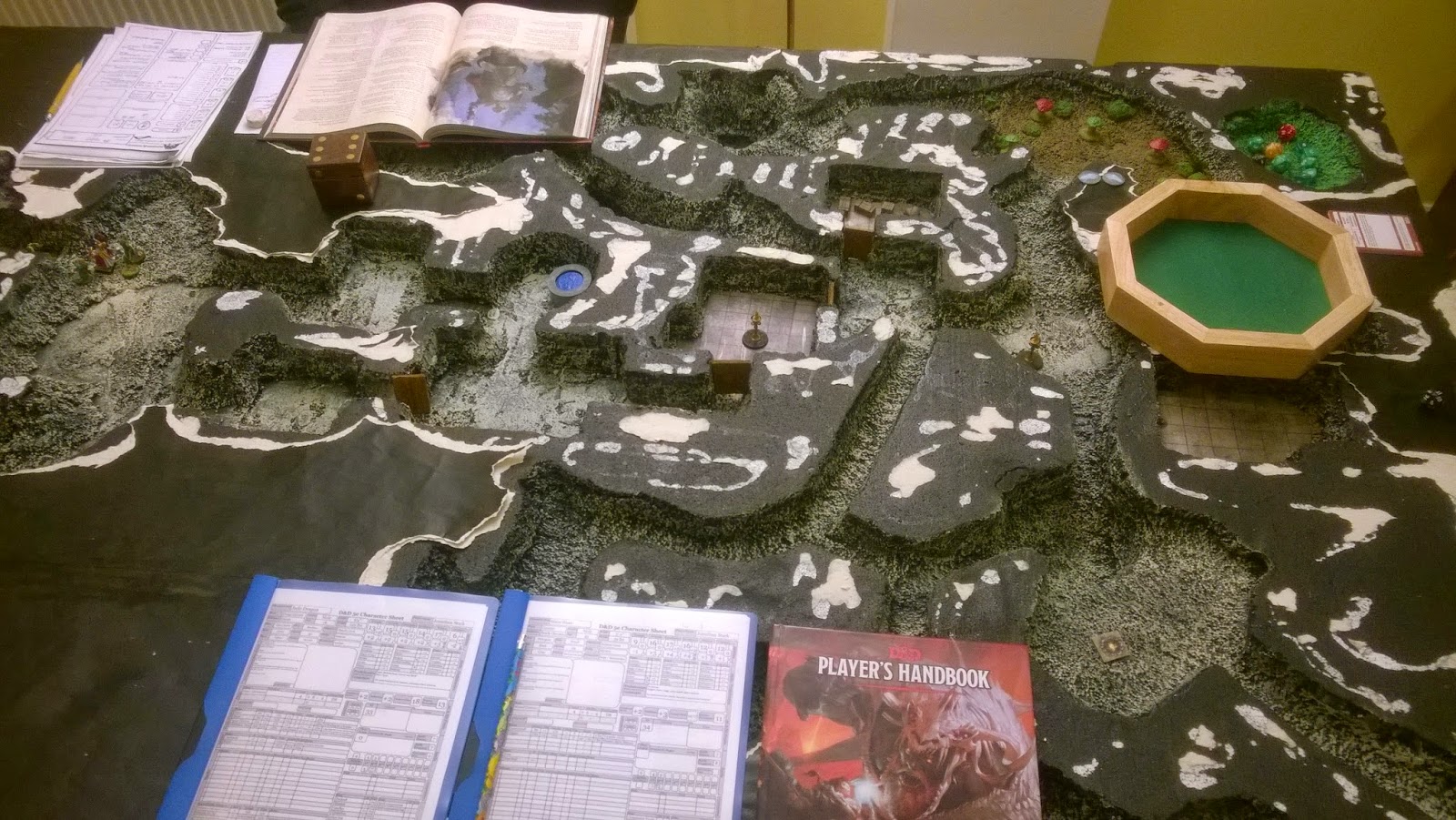 The gaming table became more hectic as the day passed, you can see my PHB and character sheets at the bottom of the picture but more importantly you can see the size and scale of the dungeon. 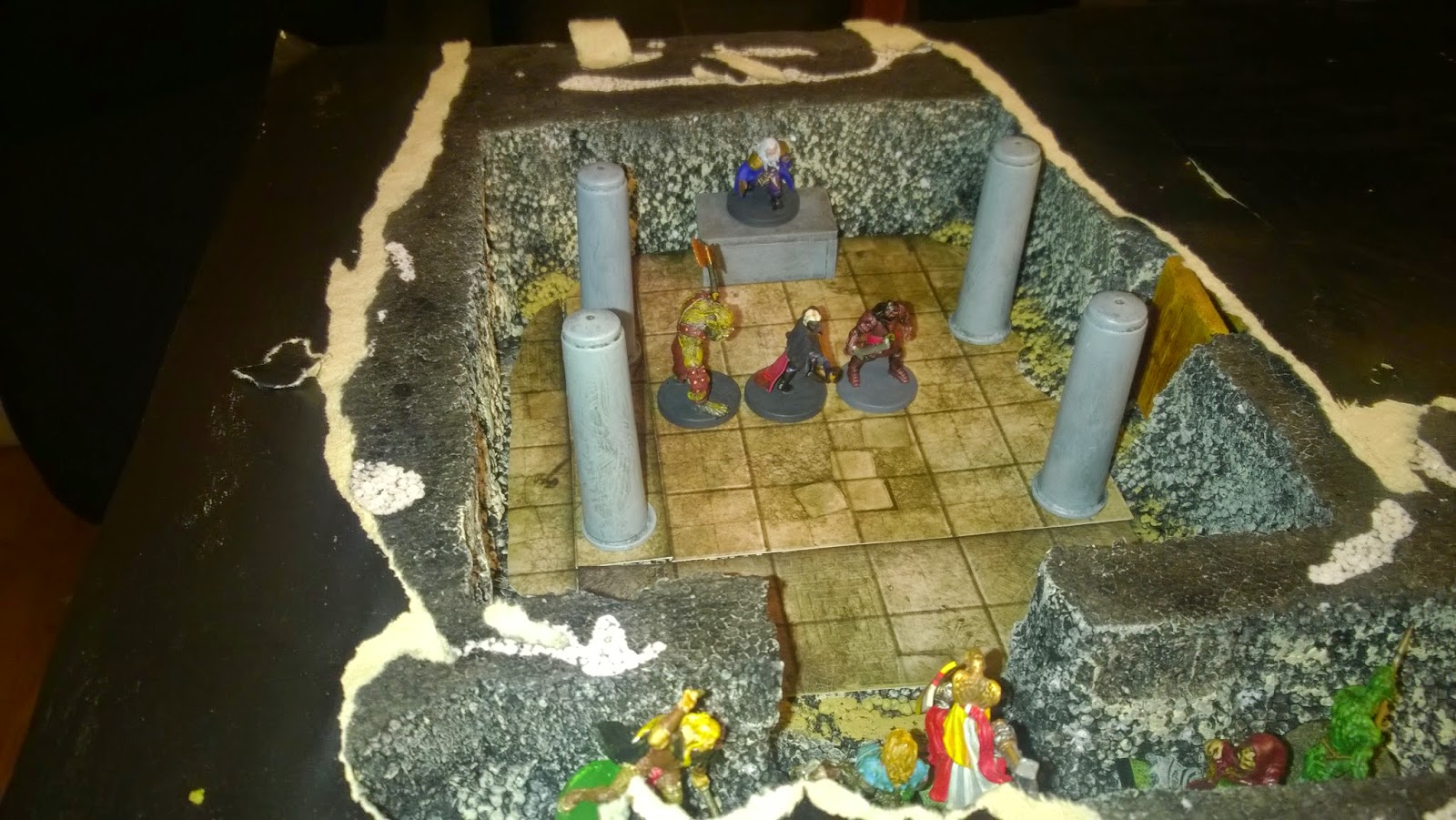 It was very late by this point.....from what I can recall it might have been 1am on Sunday morning when I took this picture.
However I can't be sure as I was probably knocking back some seriously strong coffee and eating cold potato wedges.

This picture shows one of the last fights with the main Drowe protagonist and her henchmen who were a very tough Bugbear and Hobgoblin. 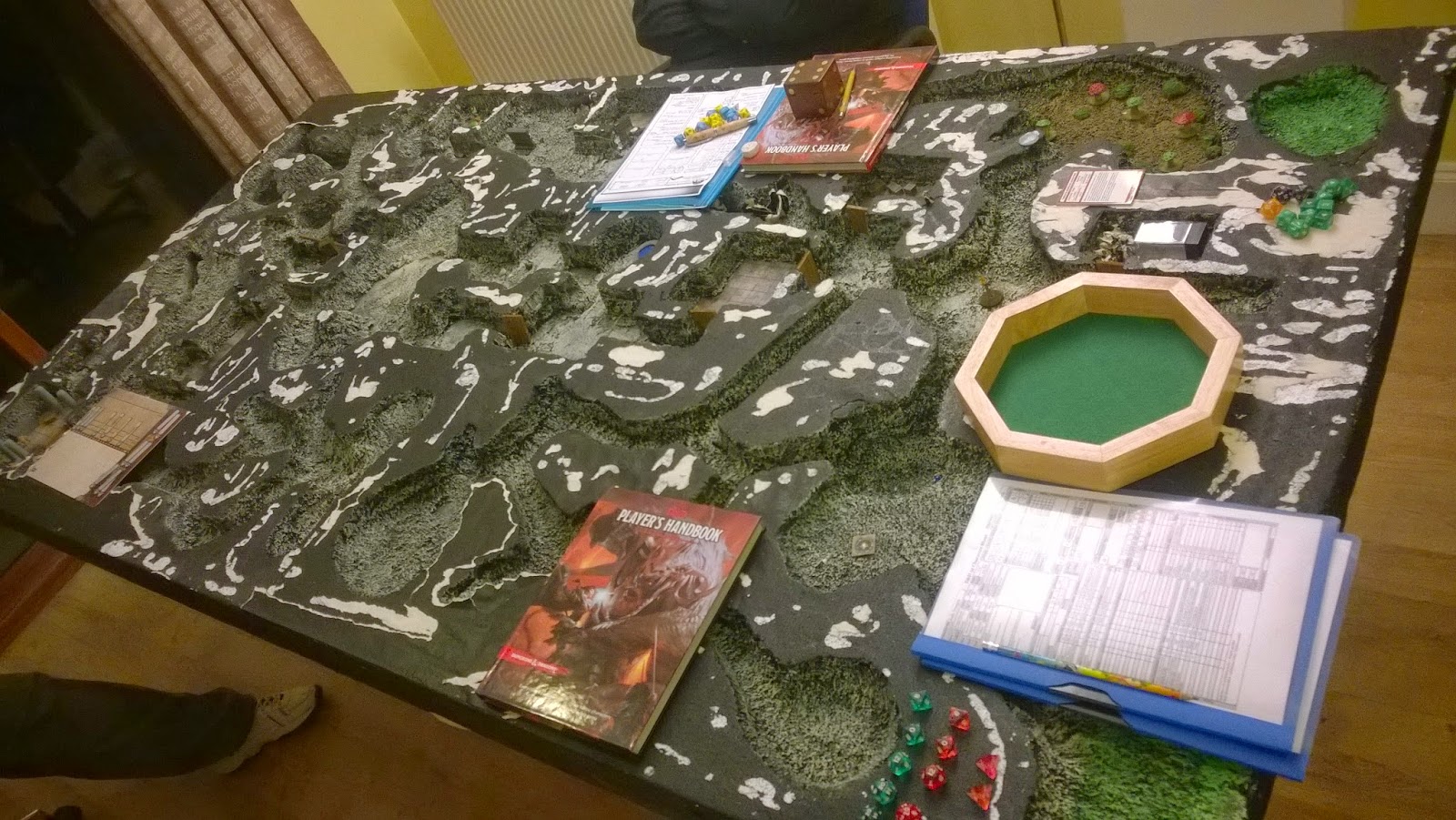 Just before we left I took this picture.
This is the entire board revealed....we actually searched every room possible..and we found the Forge of Spells. Plus we found the keys that opened the door and the password to get past the small Beholder.

Top centre - Mark and his PHB with dice and character sheet - he played the late and very sleepy Human fighter.

Left - Is our willing and able DM's left leg....Well done Phil...we all had a great time.

Top right - Donkey Daves green dice and spell cards, he was responsible for playing our Dwarven Fighter and Human Rogue.

Bottom Right  - My dice all lined up in correct numerical order and turned so that the highest number is always on top....this is a ritual I have been doing since I first played D&D about 23 years ago, (I know weird..!!), and you can also see my PHB and character sheets again. I played the Rock Gnome Wizard and the Green Dragon-Kin Cleric.