Here are a few pictures of the pyramid centre piece that I painted and built for the climatic end of the AD&D dungeon that I ran at the weekend.

The pyrmanid is made from resin and I bought it on eBay....as always.

As you can see from the pictures I base painted it a light green colour, then once that was dry I added a black and dark grey dry brushed overcoat. All in all I think it came out quite well and I am happy that the light green gives the model a sinister, evil green glow. 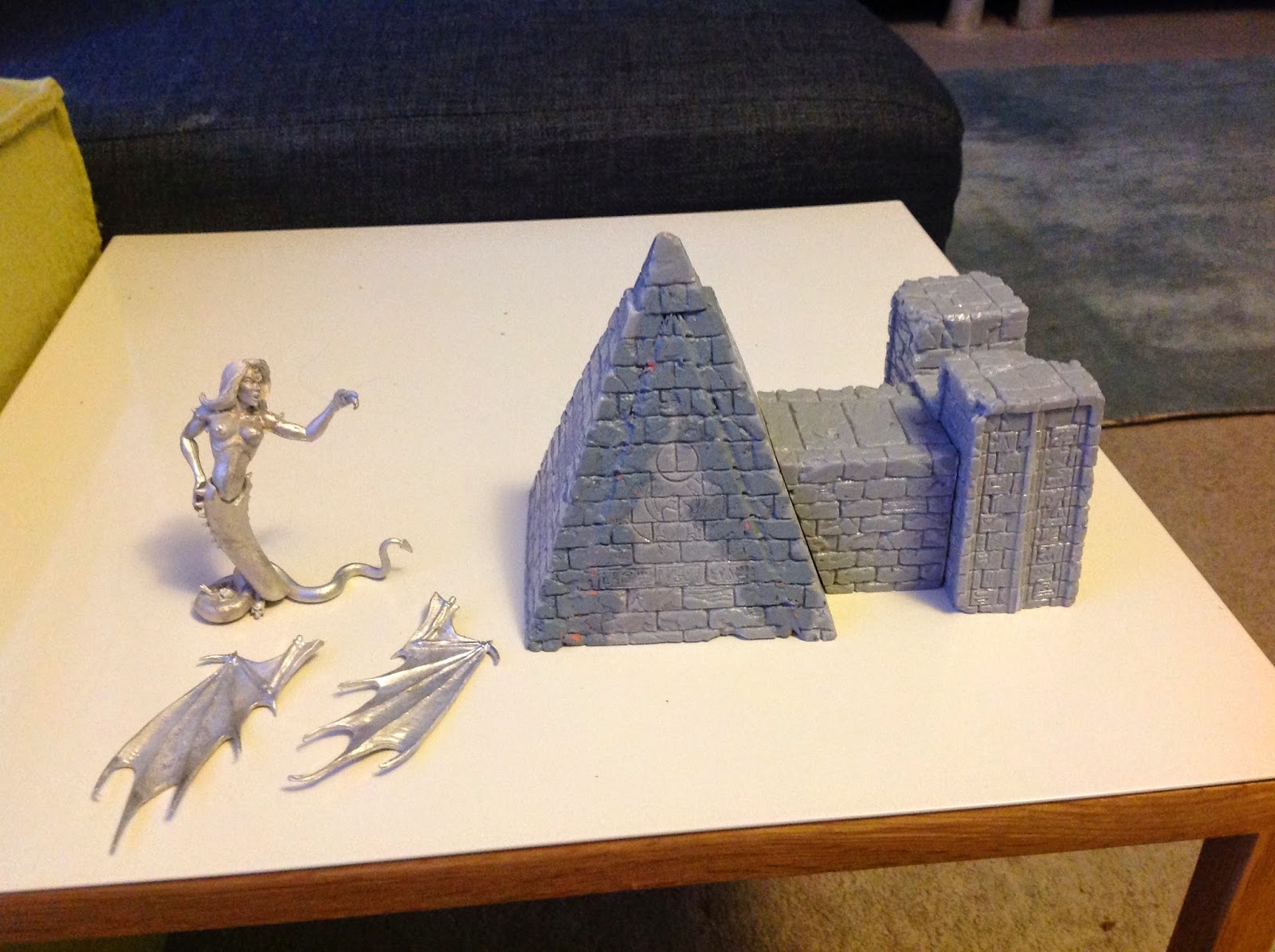 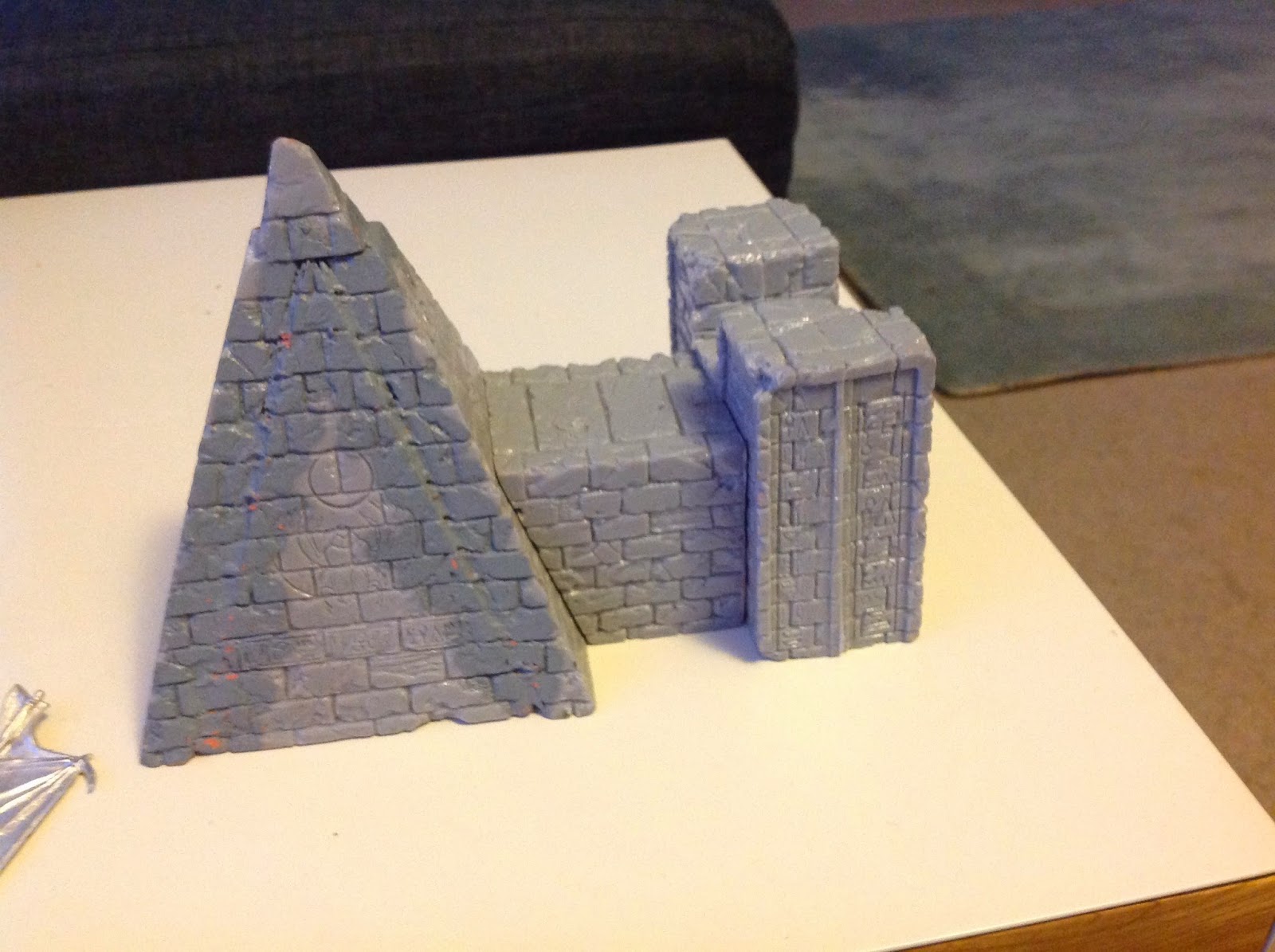 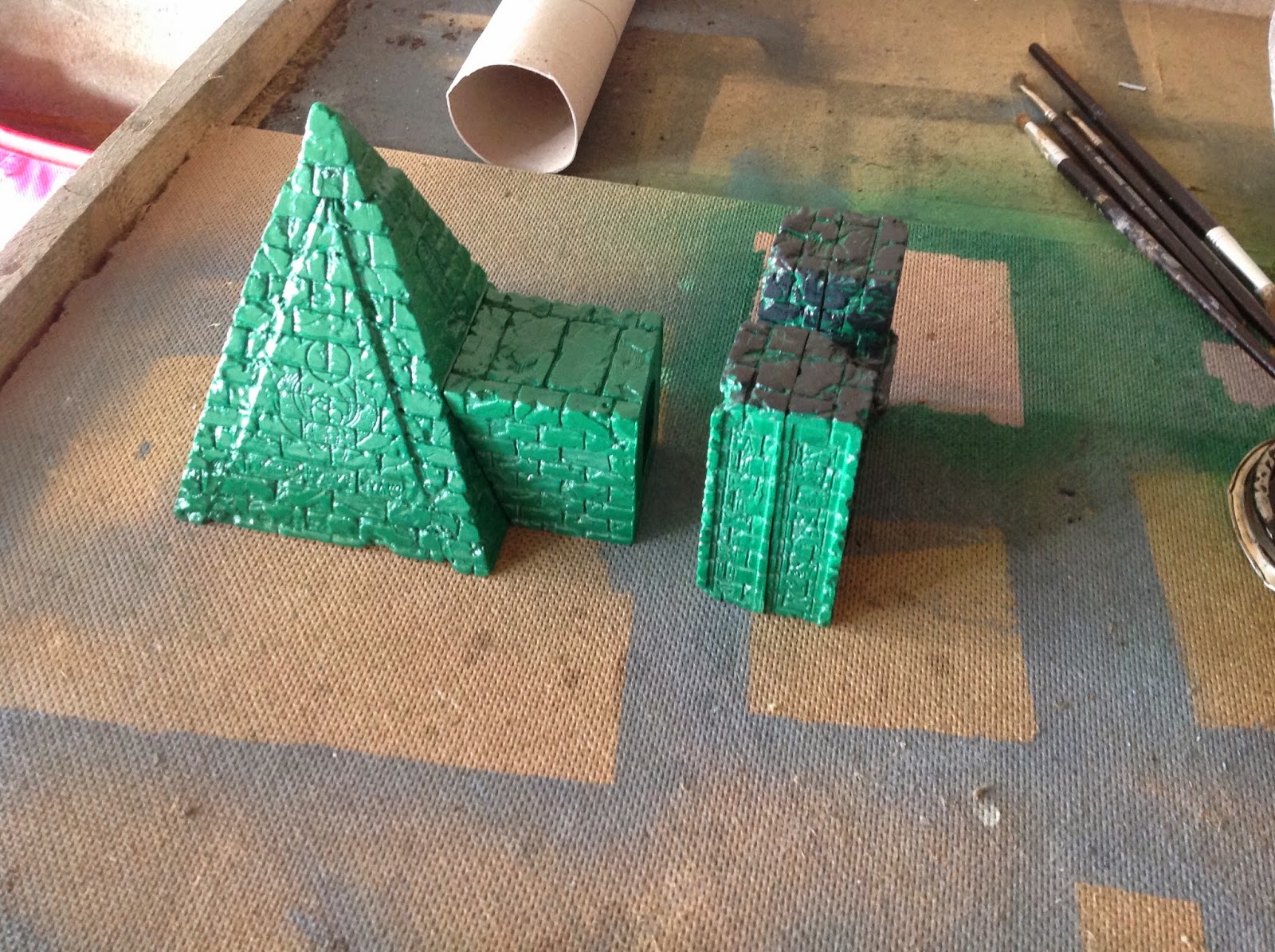 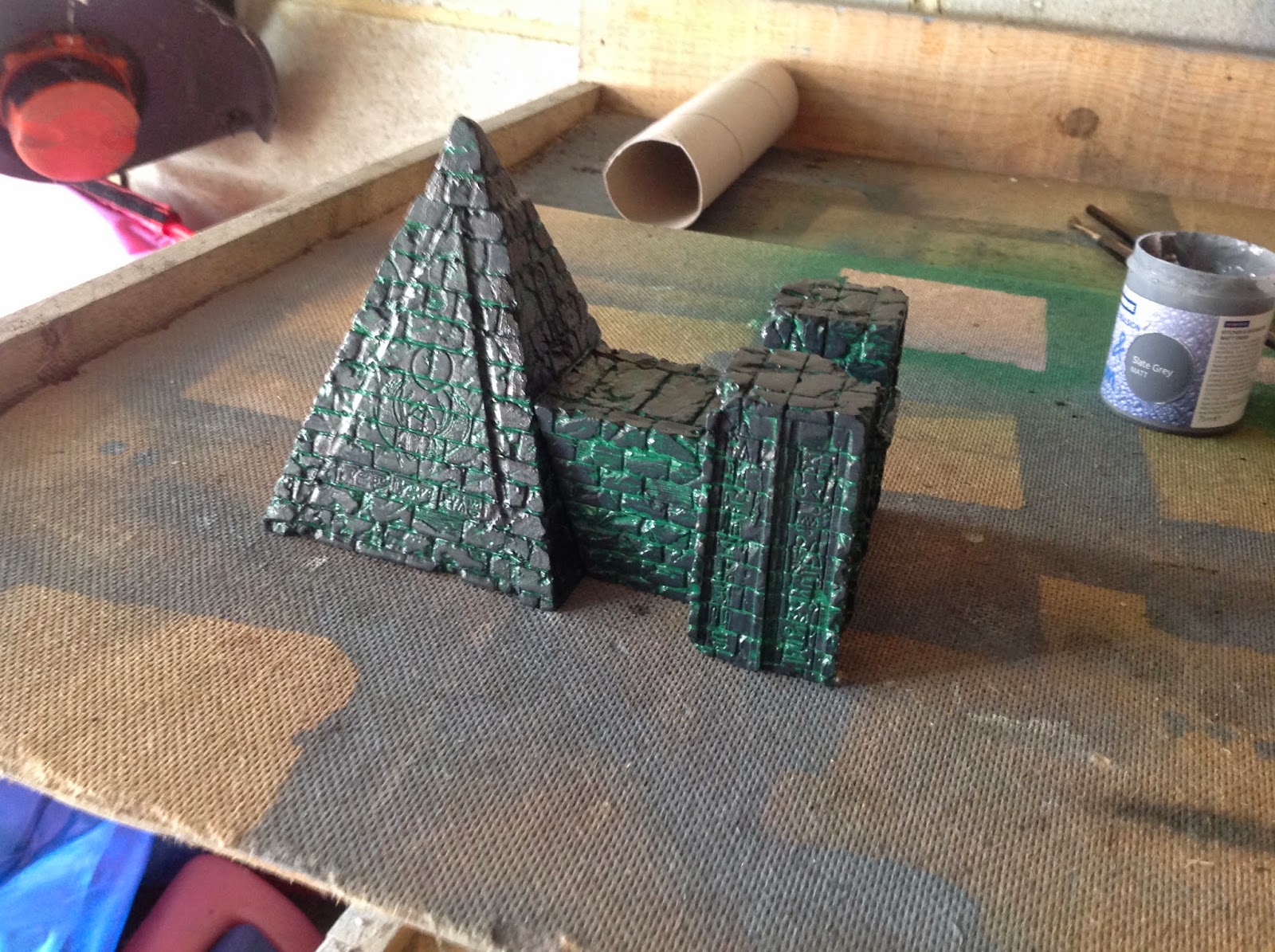 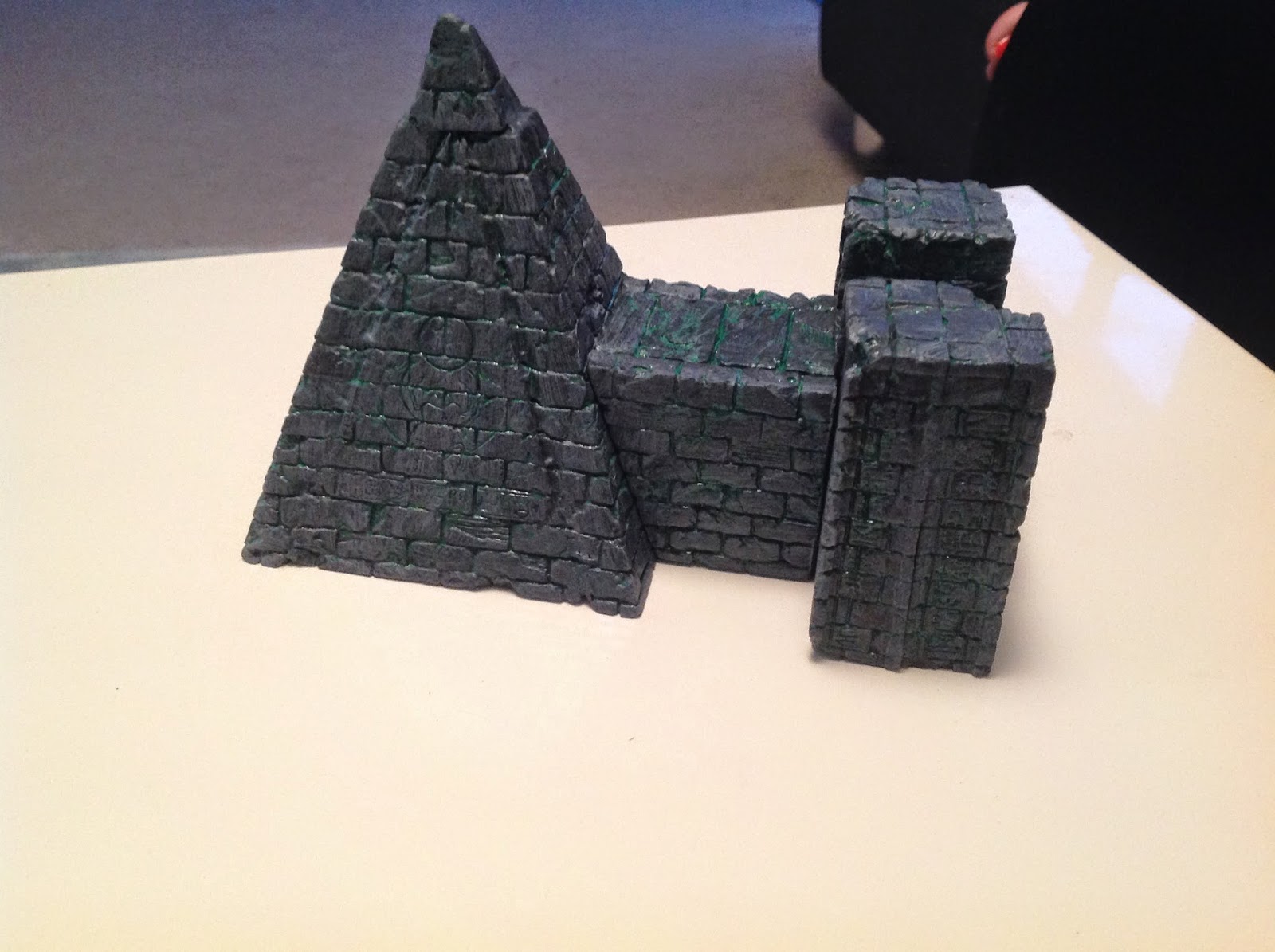 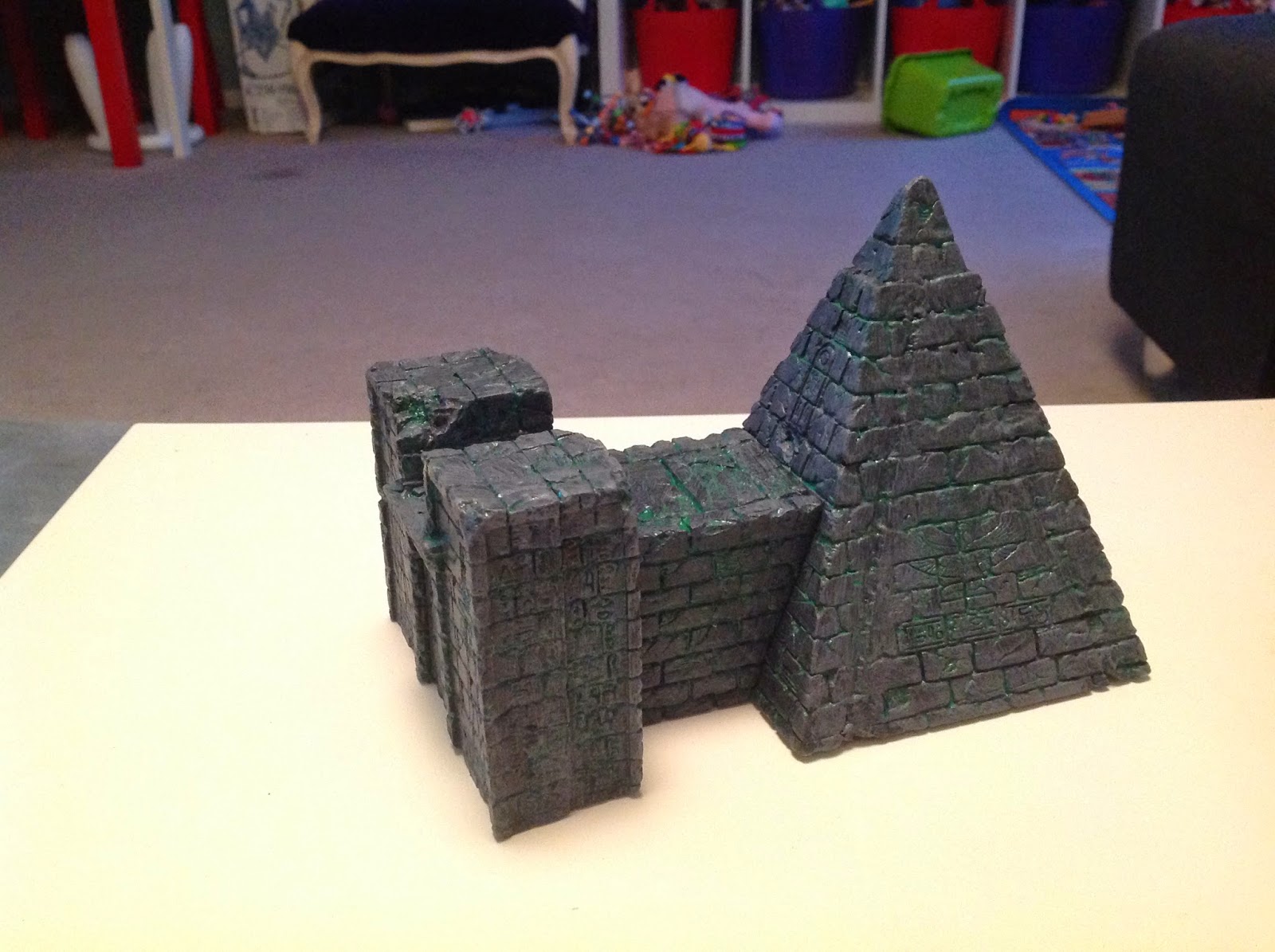 Email ThisBlogThis!Share to TwitterShare to FacebookShare to Pinterest
Labels: AD&D Pyramid, Blipdoolpoolp, Dungeons and Dragons, Pearl of the Sea Mother

Here are a few pictures of the Blipdoolpoolp model that I crafted, I used two separate models that I bought. One was a large female serpent and the other was some sort of lobster monster.

I had to remove the arms up to the shoulders on the female serpent model, drill small holes and then attach the lobster claws. Once that was done I used milliput to fill in the gaps between the arms and also around the waist then I covered her face in milliput as well. Covering the face was done so that I could give her a less human visage, I later added some more details to the head and face like the antennae and lobster mandibles.

All in all I am very happy with the model, she towered over the PC's as you can see and had her vengeance for what the party had done....hell hath no fury like a huge lobster lady scorn.! 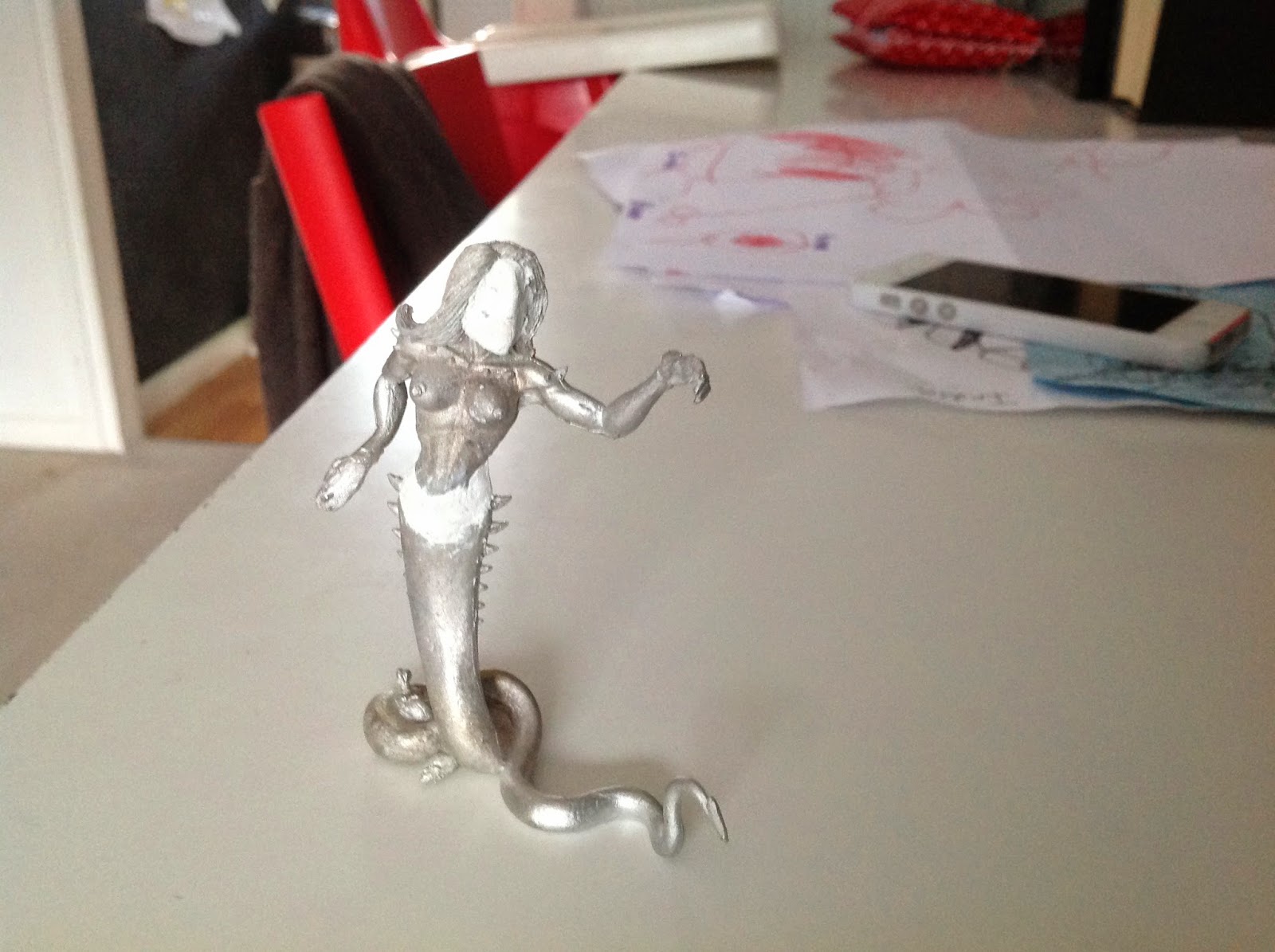 You can see the basic model here, I made the mistake of fixing the body to the serpent tail before adding the new arms. 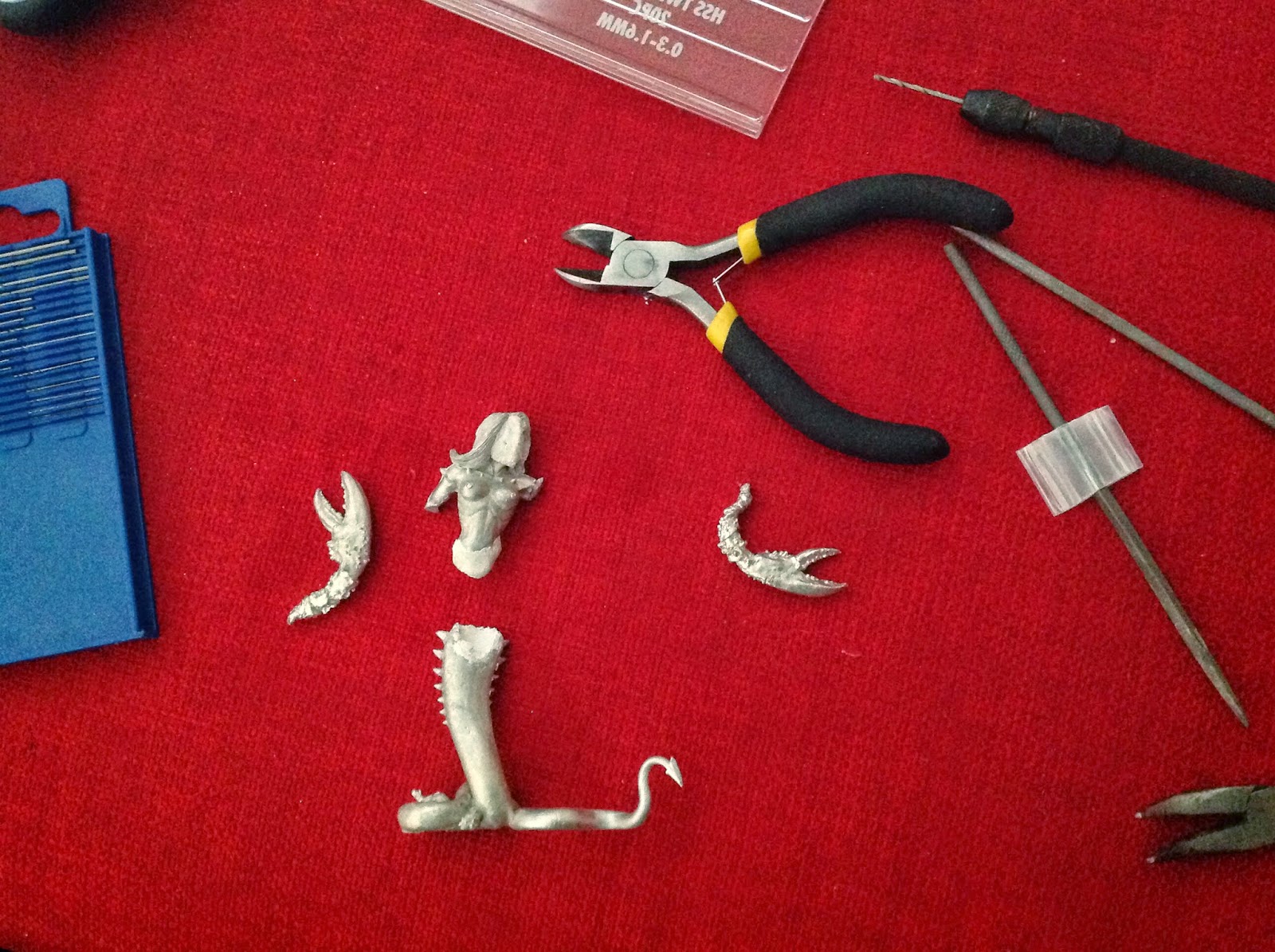 You can see from this picture that I detached the body and then clipped the arms up to the shoulders, I then drilled some holes so that I could fox the new lobster claws into place. 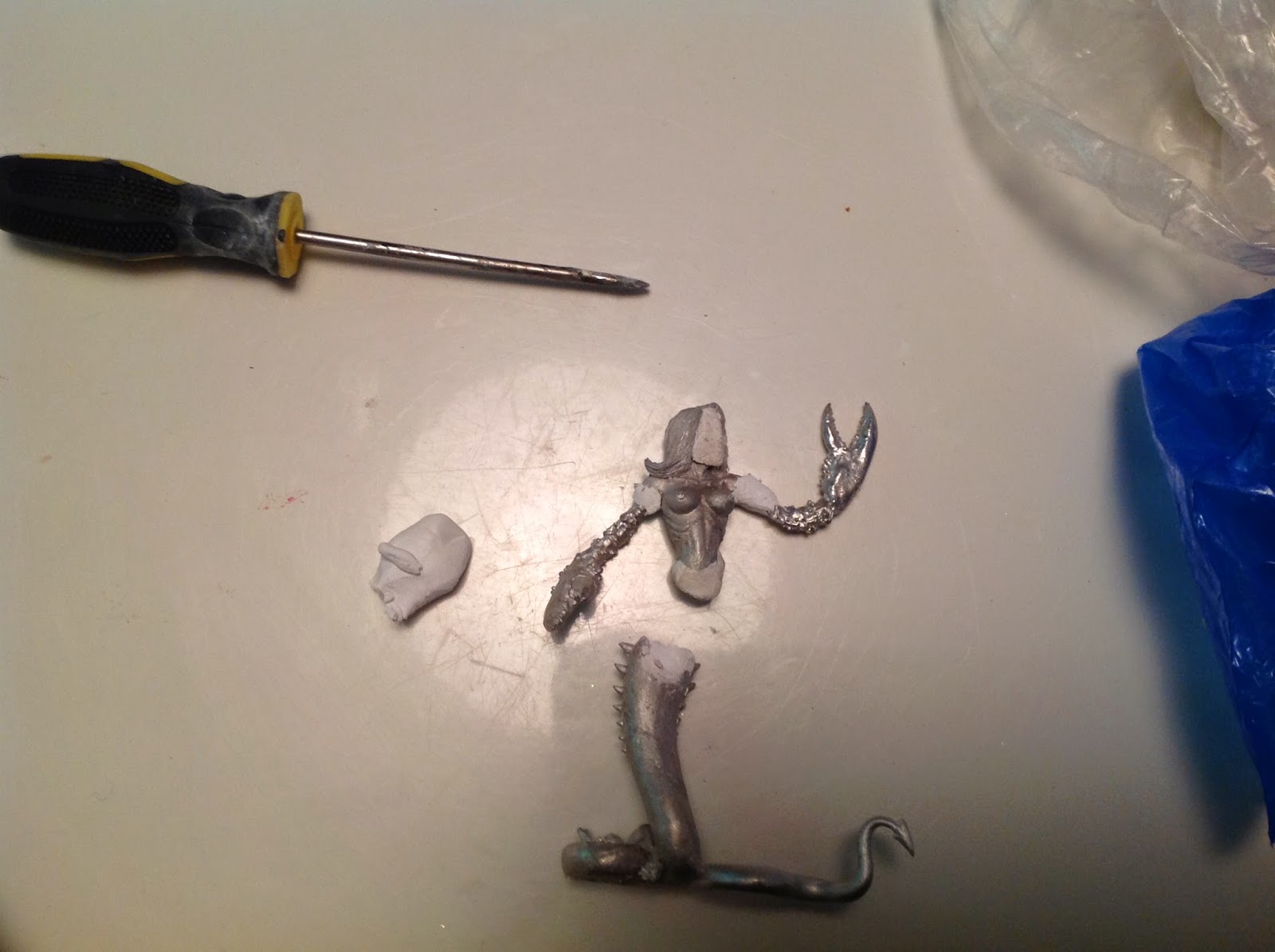 Almost done, the new arms were fixed into place using glue and milliput. 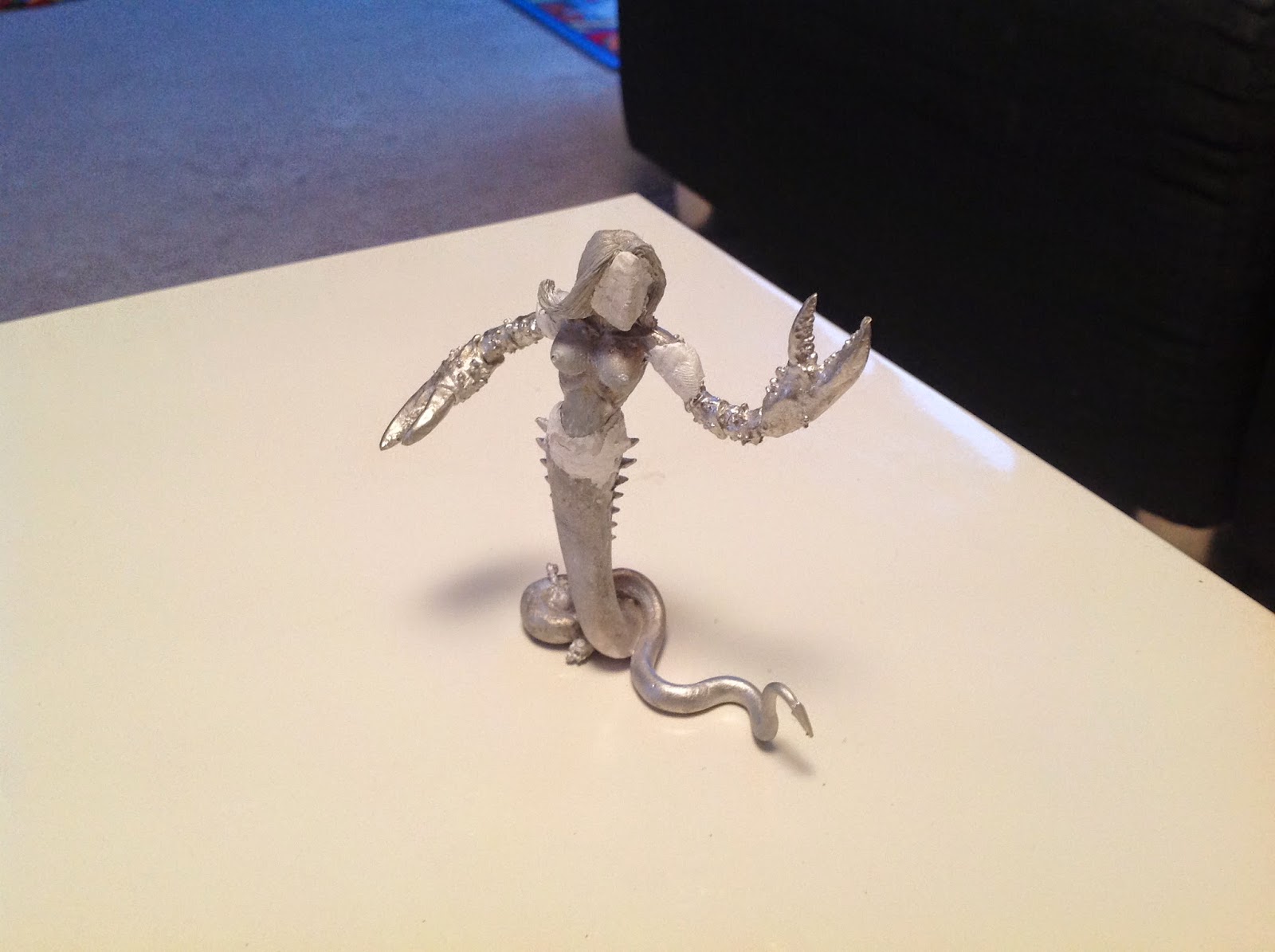 Here is the completed model, the arms fixed into place and the body and serpent tail attached, 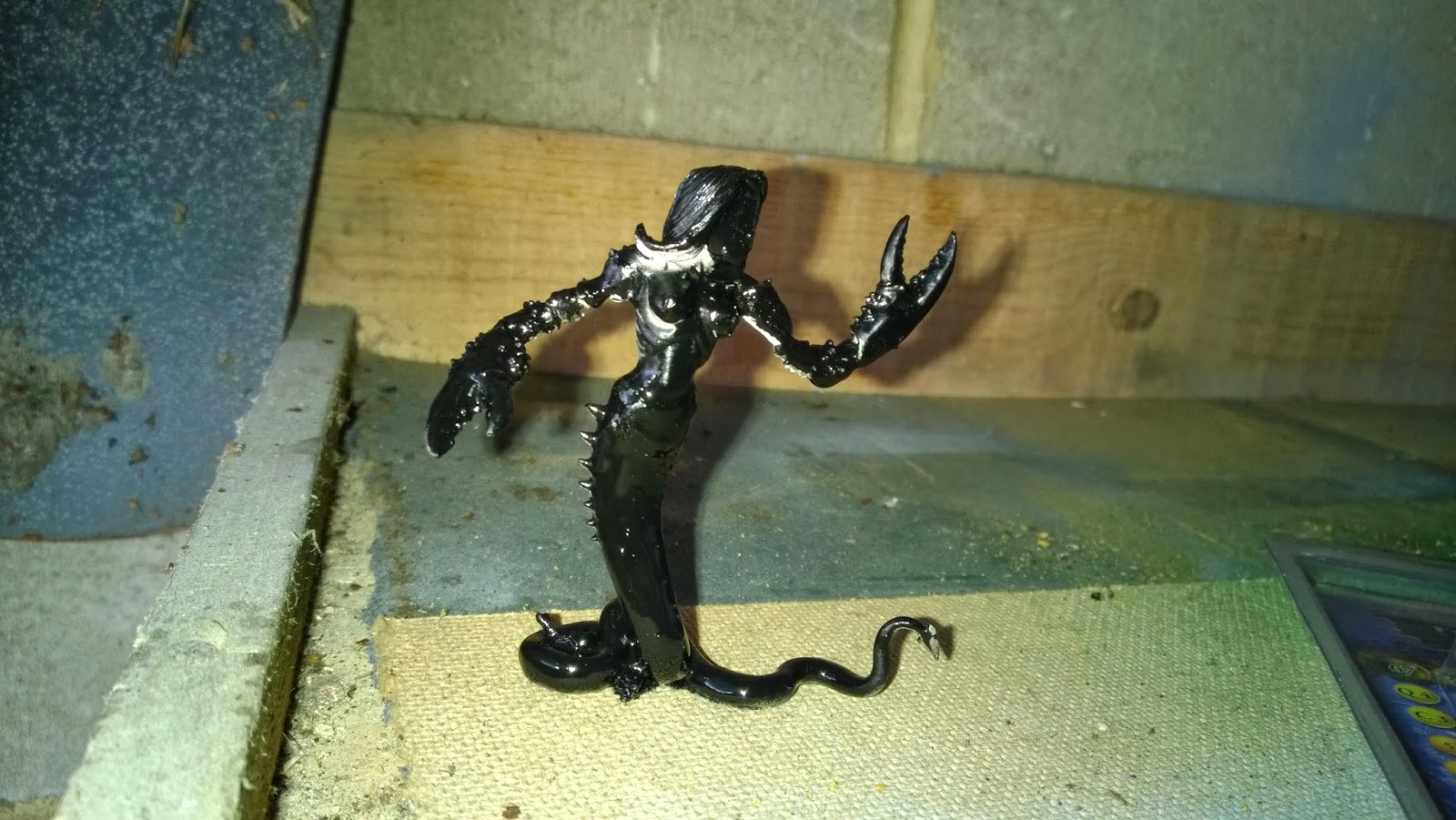 I have base painted the model in black, once this dries I will start painting this beauty. I am a bit worried about painting this model as it is quite large but as soon as she is done I will add some new pictures.

Email ThisBlogThis!Share to TwitterShare to FacebookShare to Pinterest
Labels: Blipdoolpoolp, Dungeons and Dragons, Pearl of the Sea Mother

On the behest of Lord Piergeiron Paladinson the party have traveled to the sea port of Briggs Point from Waterdeep and met up with their contact, the Deva called Makanel.

Makanel has informed the party that the local fishing village has been infected with a curse that has caused all of the inhabitants to go insane. This insanity has caused various member of the community to act in the following ways.

Villagers begin to greet one another by placing their hands against their necks and flapping them like gills.
The only food made available and consumed in the village is lobster.
A fisherman dashes through town, shouting “I don’t want to wait! The time is now!”
People press their ears to the ground (even in the flood waters), nearly drowning themselves in the process. If asked about this behavior, they reply that they are interested in what the fish have to say.

She has also informed the party that the insanity is being caused by a tribe of Kuo-Toa who have recently taken up ownership of a large sunken temple to the vile goddess Blipdoolpoolp and that their use of an evil artifact is causing an ever increasing tide to wash inland and turn any surface dwellers insane.

The party have now been tasked with the job of descending underground to this temple, destroying any Kuo-Toa that they encounter, freeing any slaves that they find, finding the Pearl of the Sea Mother and then bringing this artifact to the surface so that is can be destroyed.

Will the party triumph....