Final battle with the Tarrasque.

I didn't get a chance to take any photos of the final battle as I was too busy running the Tarrasque and keeping an eye on what was going on with the Jaegers.

The models that you can see were built and painted by myself, see earlier blog posts, the "Tarrasque" was a Kaiju model that I bought from Forbidden Planet in London....it's a great store and very close to my office....and the street tiles and the 3D card buildings are from the Malifaux Street and Buildings boxed sets.

Oh the Jaeger models were bought from scibor miniatures....awesome miniatures and a really cool website, I've bought a tonne of stuff from them and never been disappointed with the quality of their resin models.

I tried to give the Jaegers cool but cheesy names.

Any way, enough of that here are the pictures. 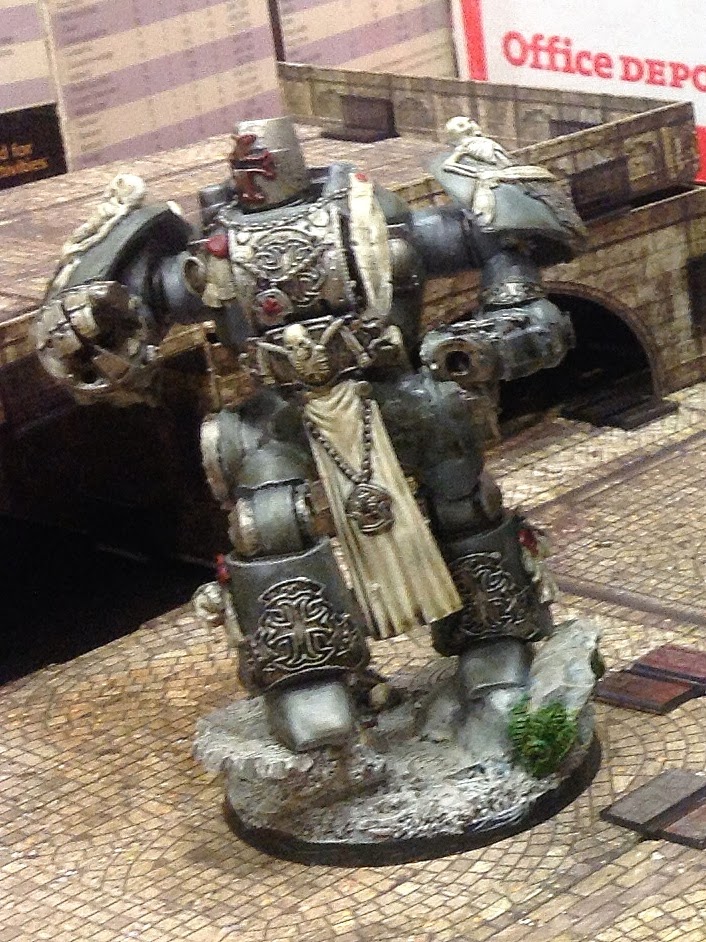 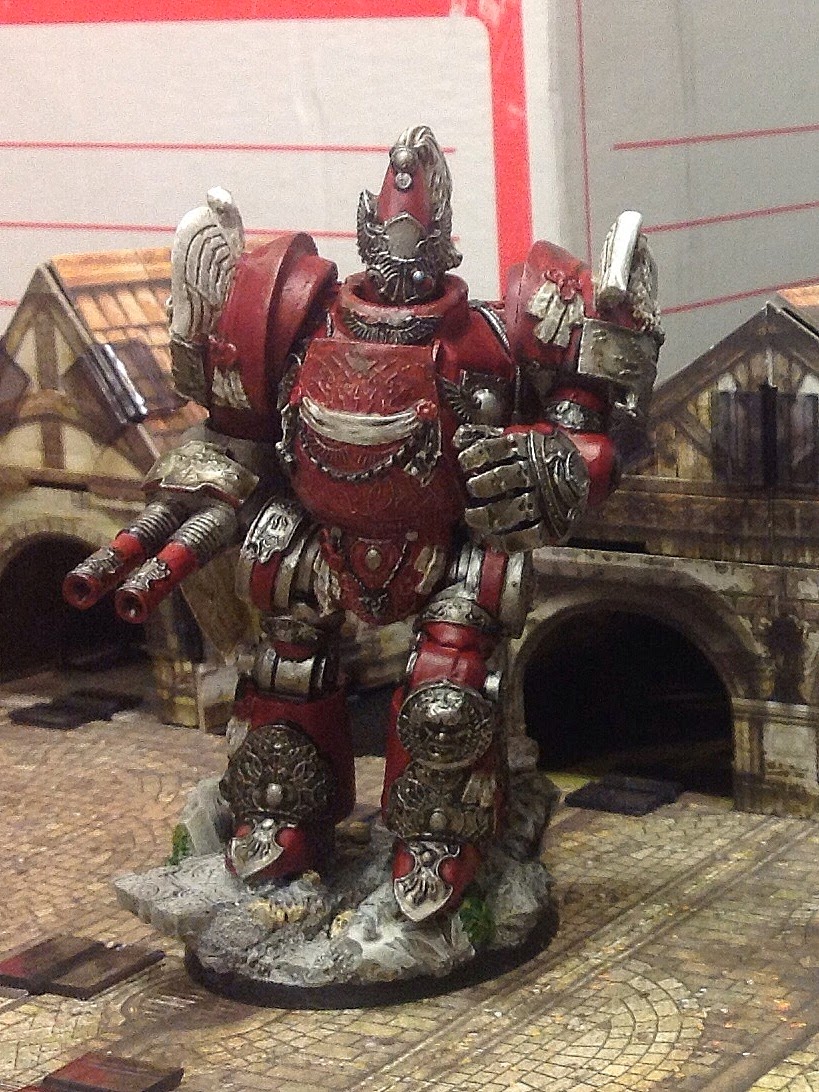 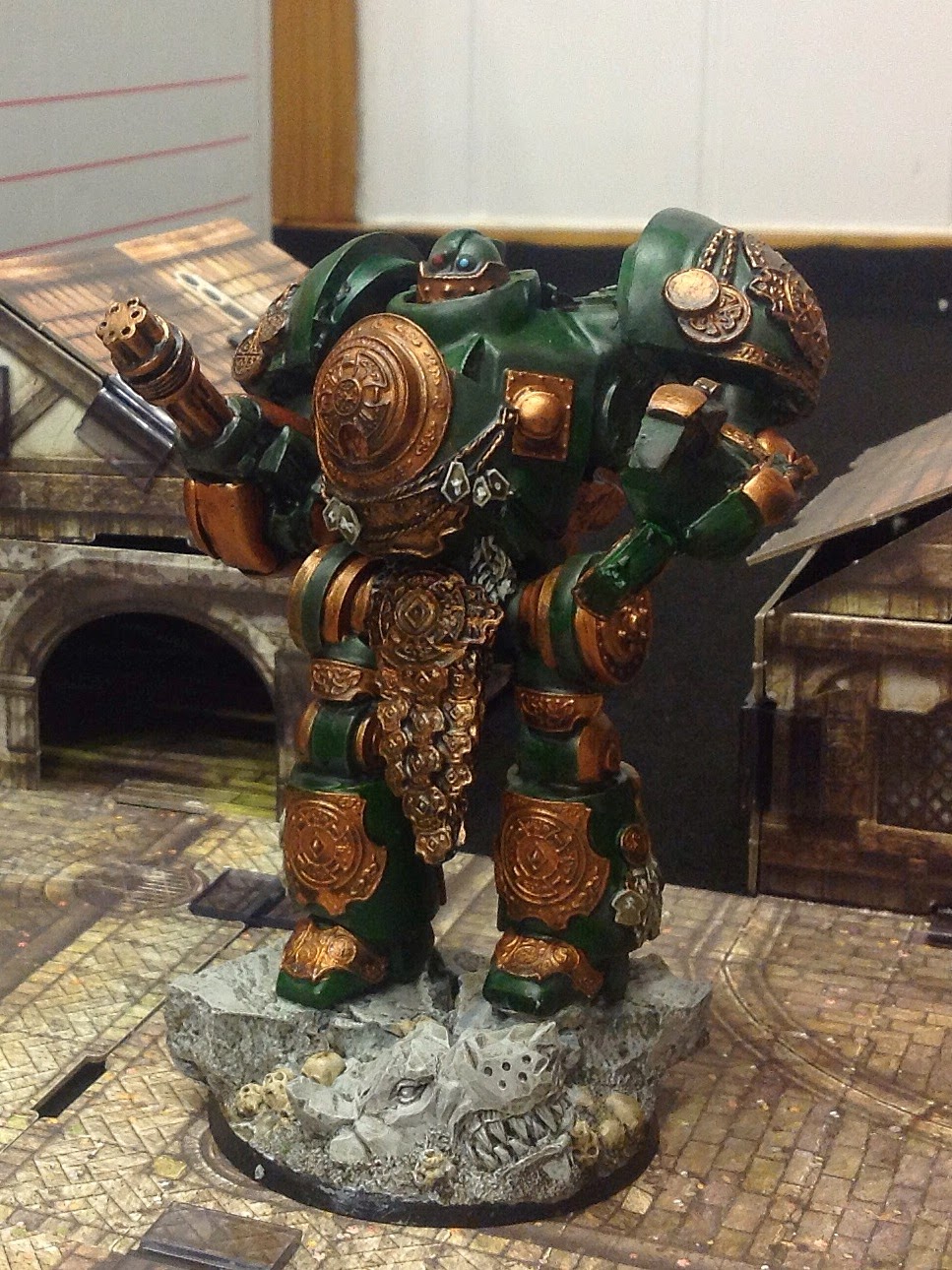 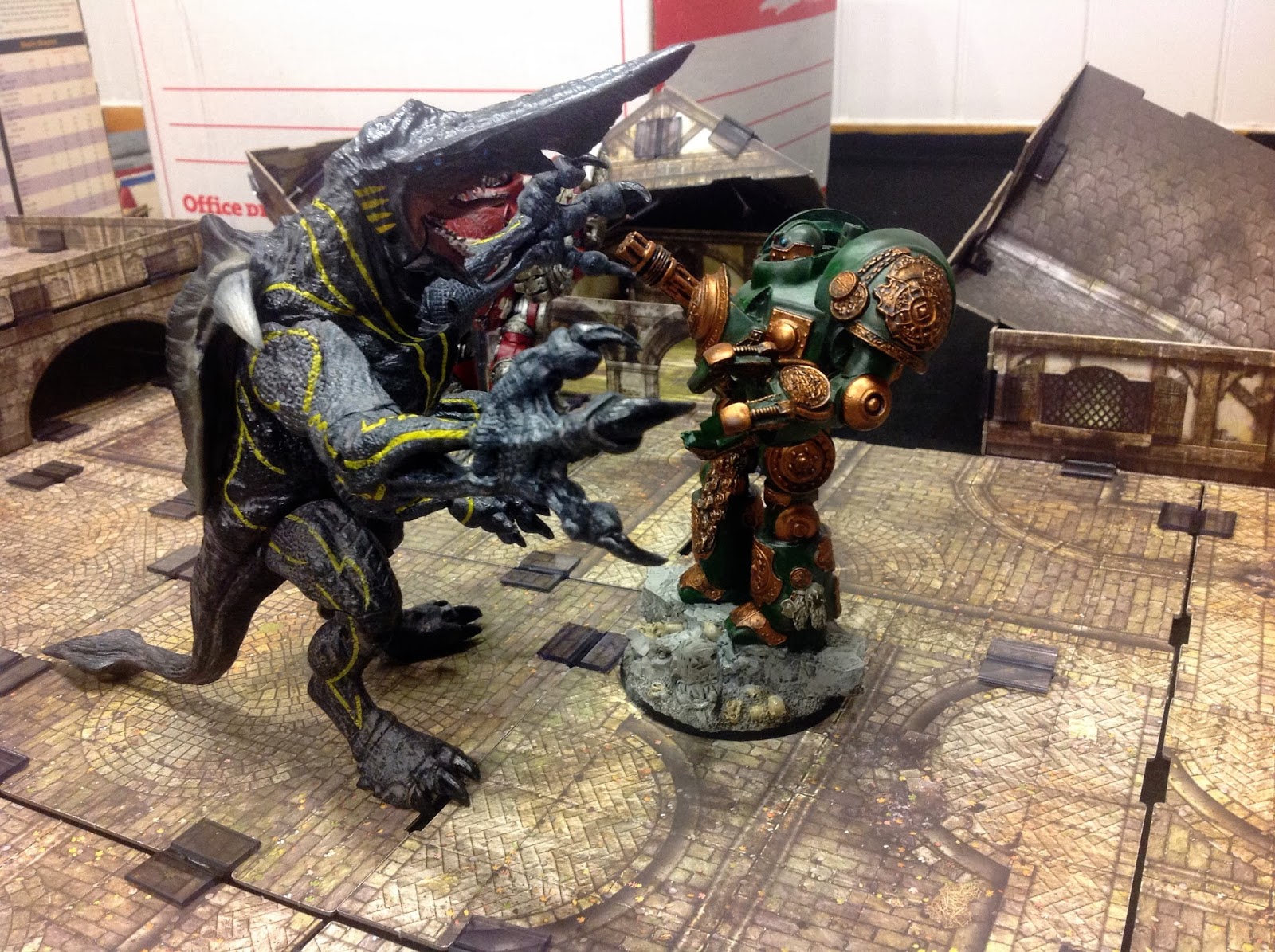 The Tarrasque chewing the face of Celtic Hammer 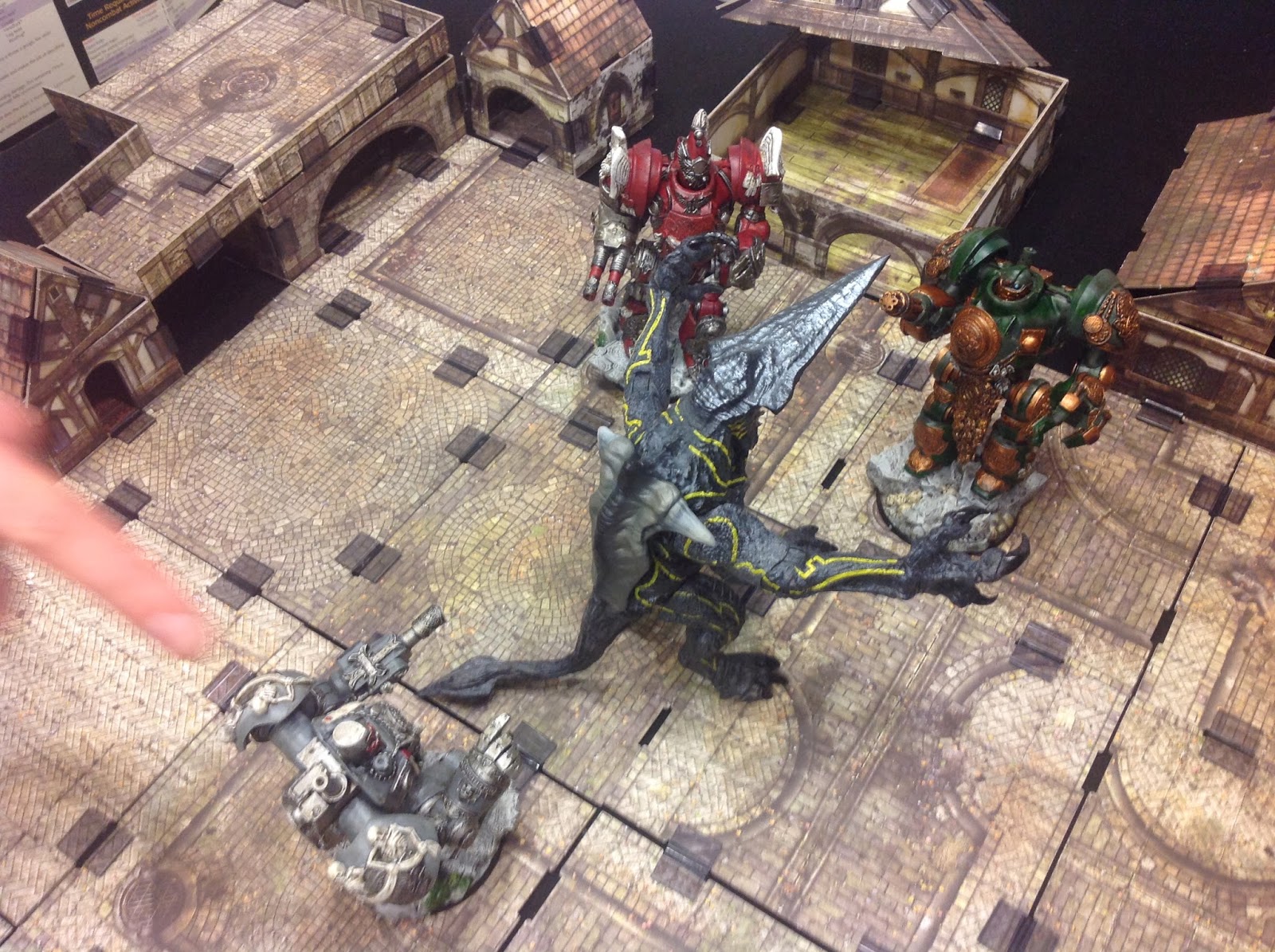 All 3 Jaegers fighting the Tarrasque and possibly my finger pointing at Righteous Fury.!

At the end of the fight both Righteous Fury and Celtic Hammer has been smashed to pieces and the pilots had to evacuate the Jaegers, this left just Legionnaire Crixus to fight and with a final upper cut to the jaw he defeated the Tarrasque and saved Waterdeep....

Our D&D session had started at aboout 10am last Saturday and the final battle ended at 11:30pm, so we gamed for a solid 13 hours straight...only stopping to order pizzas and the occasional bio.....needless to say it was a great laugh and I really enjoyed running the game.

Updated photos from last week - Ark of the Mad Mage

So I have some new photos from last Saturdays game, these were taken by my friend who was playing the Gnome Cleric, he's got a much sharper eye when it comes to photos so these look really good.

Attached below are pictures of the set piece rooms for levels 1 & 2 of the dungeon. 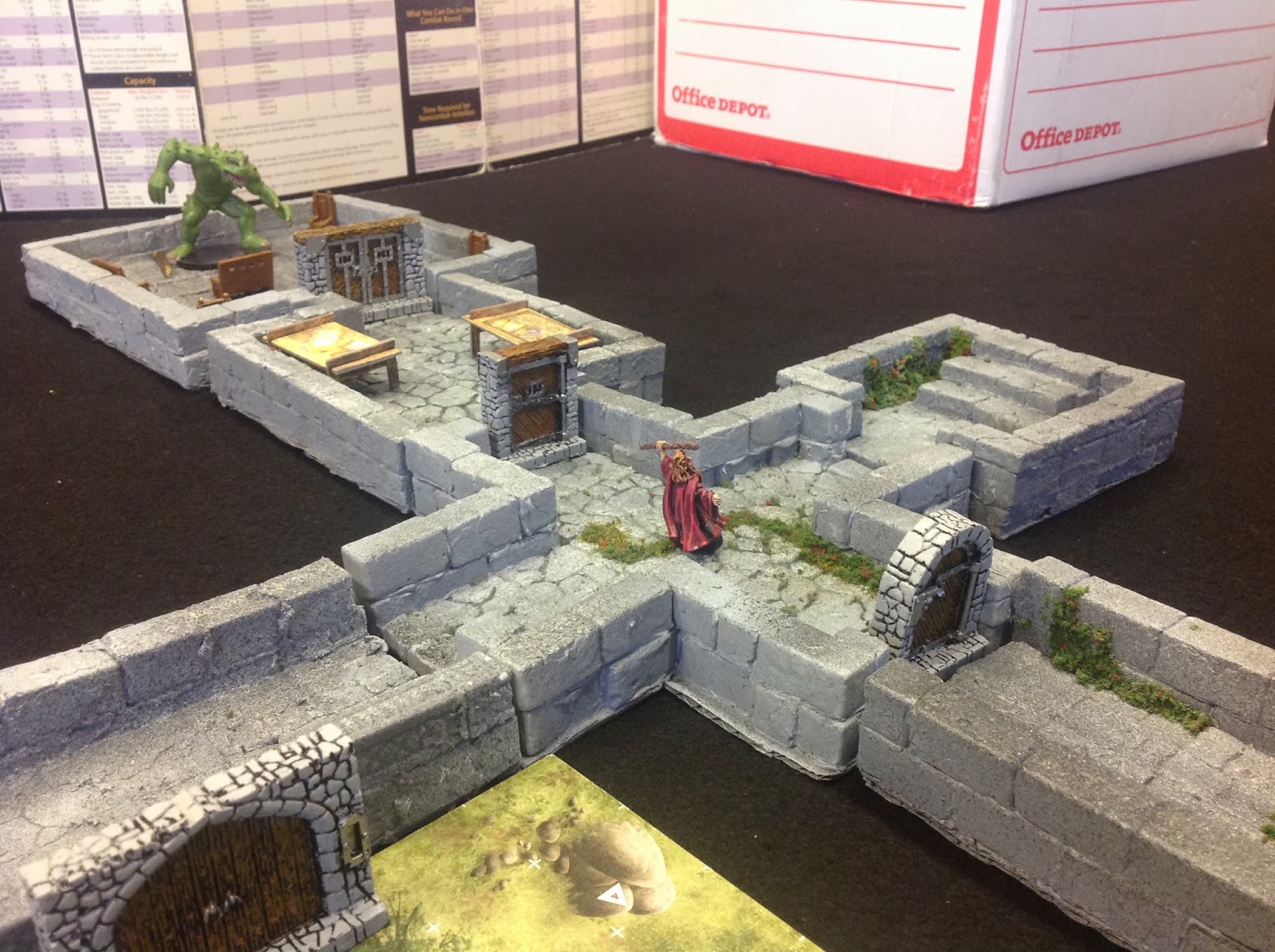 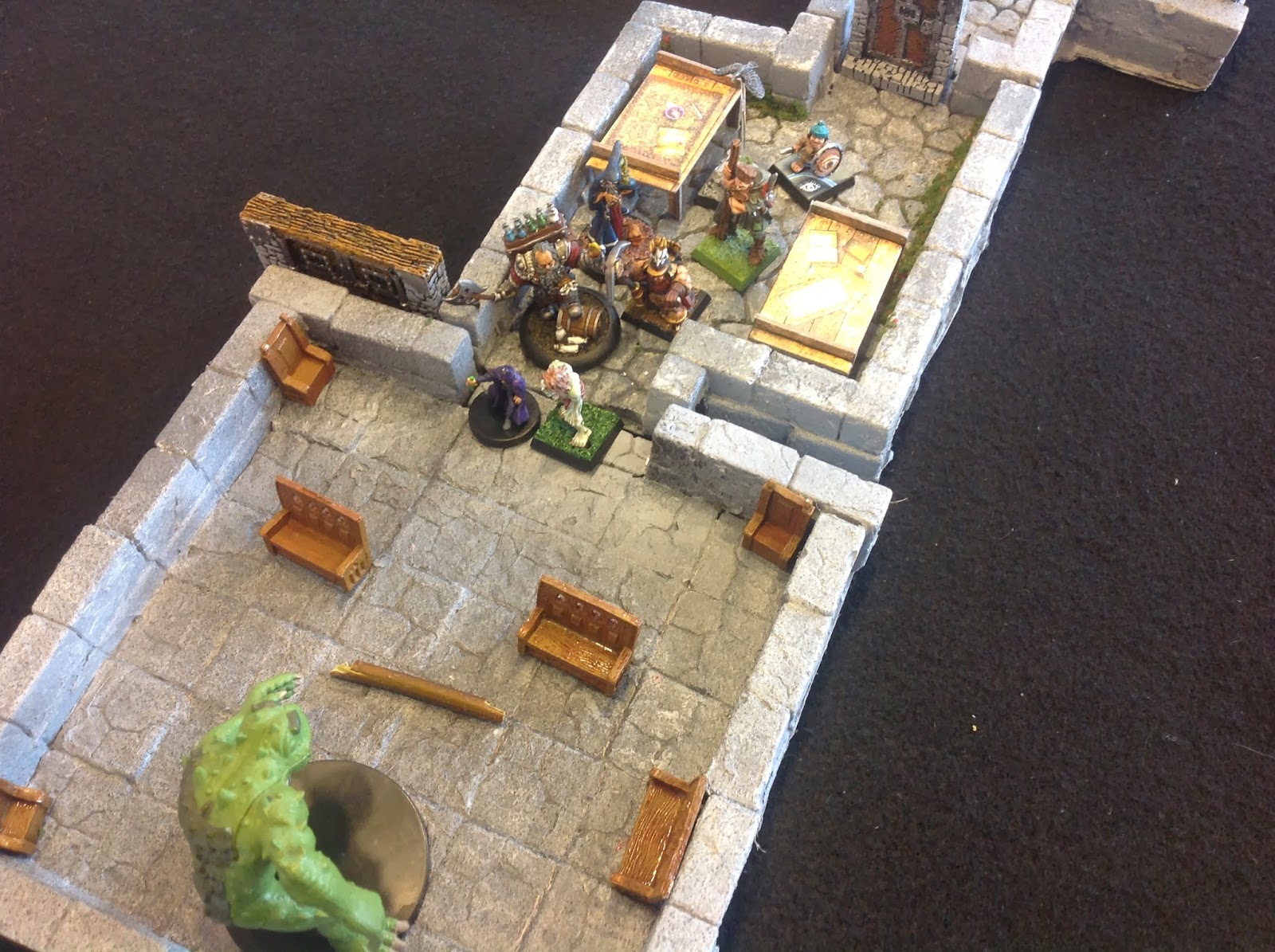 Frog temple again, the party have just made their way through the Wizards room and are now about the "Stroke the Frog"....together.! 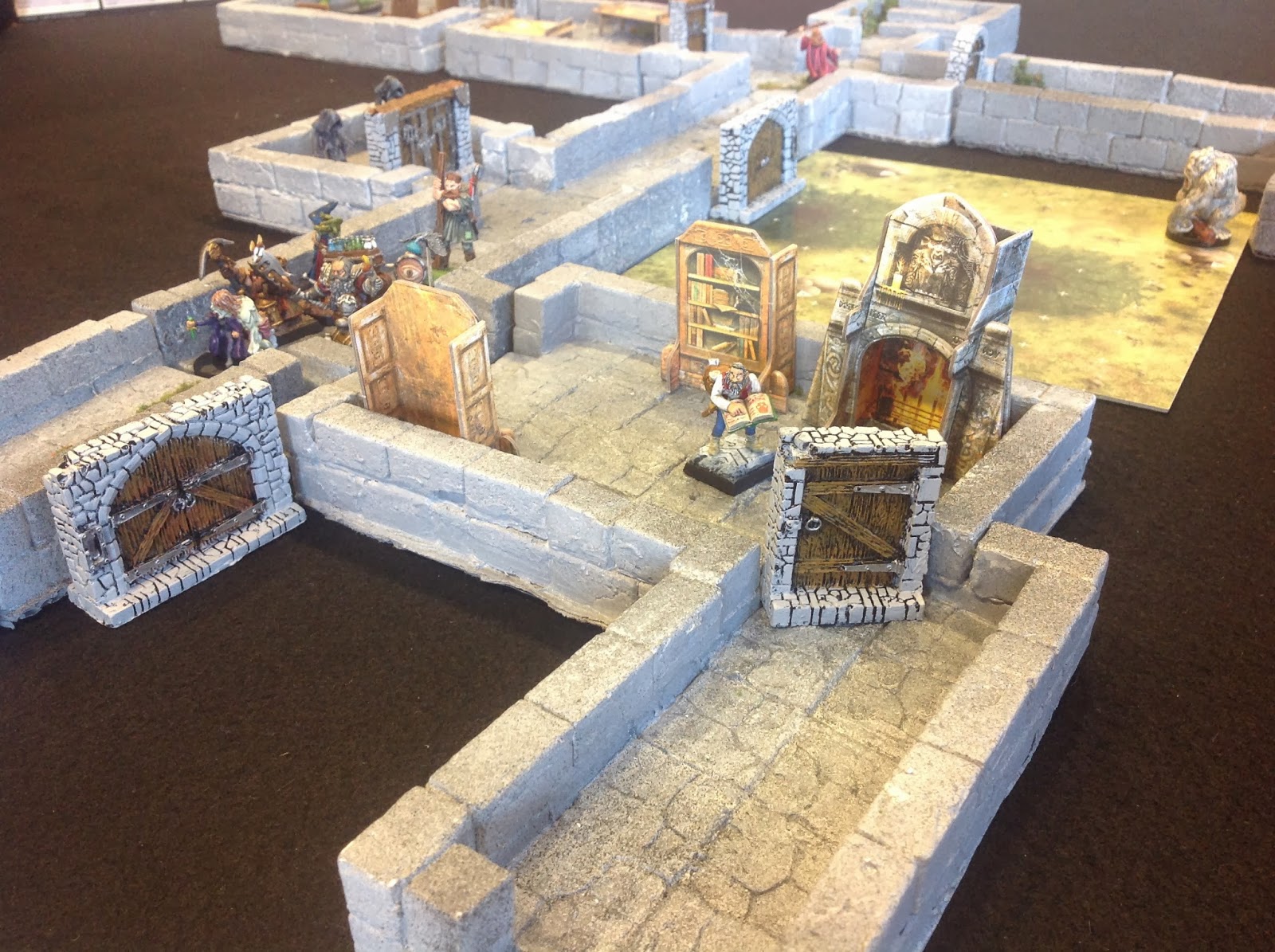 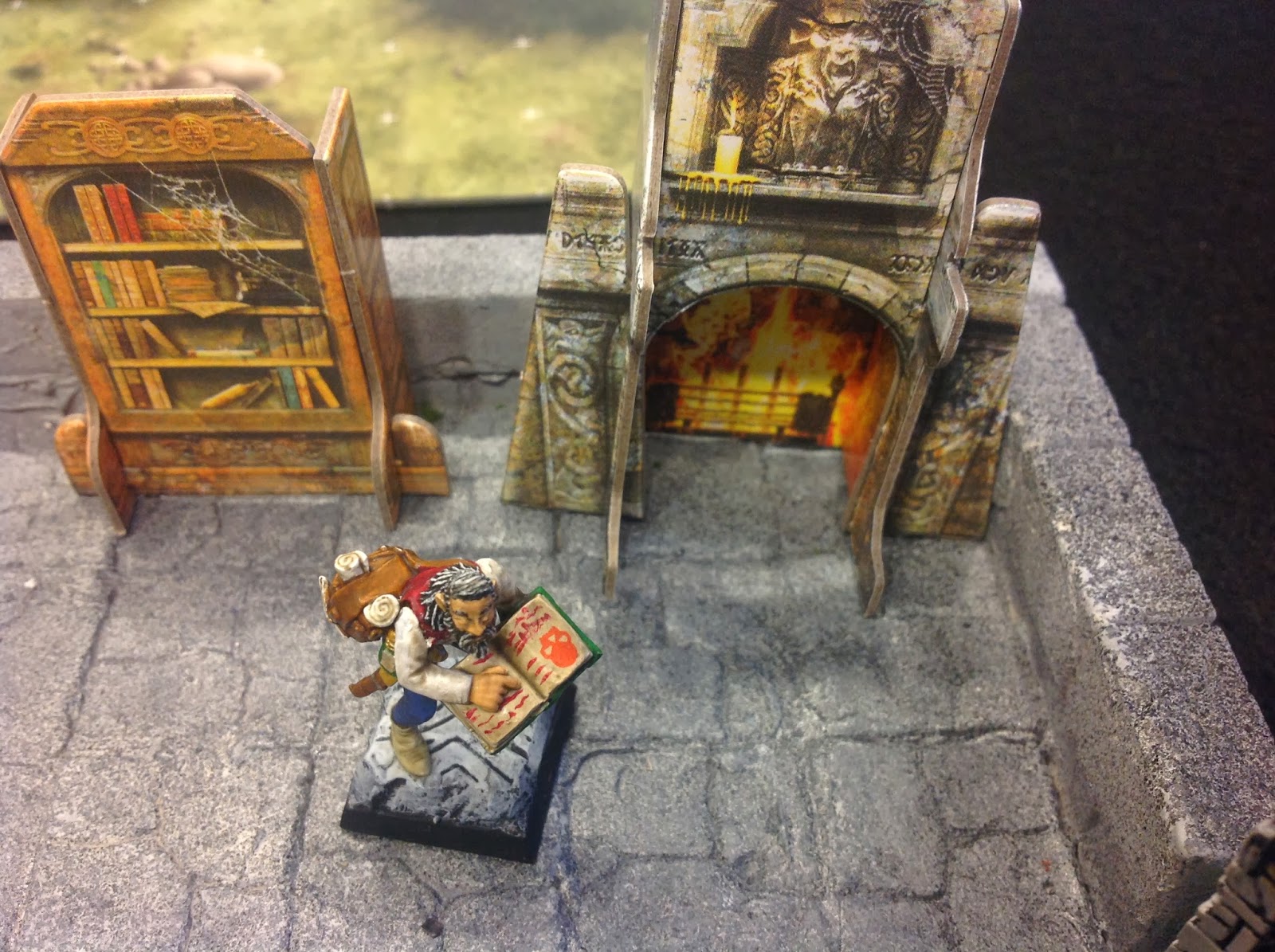 Book room and statue of Halaster holding his book 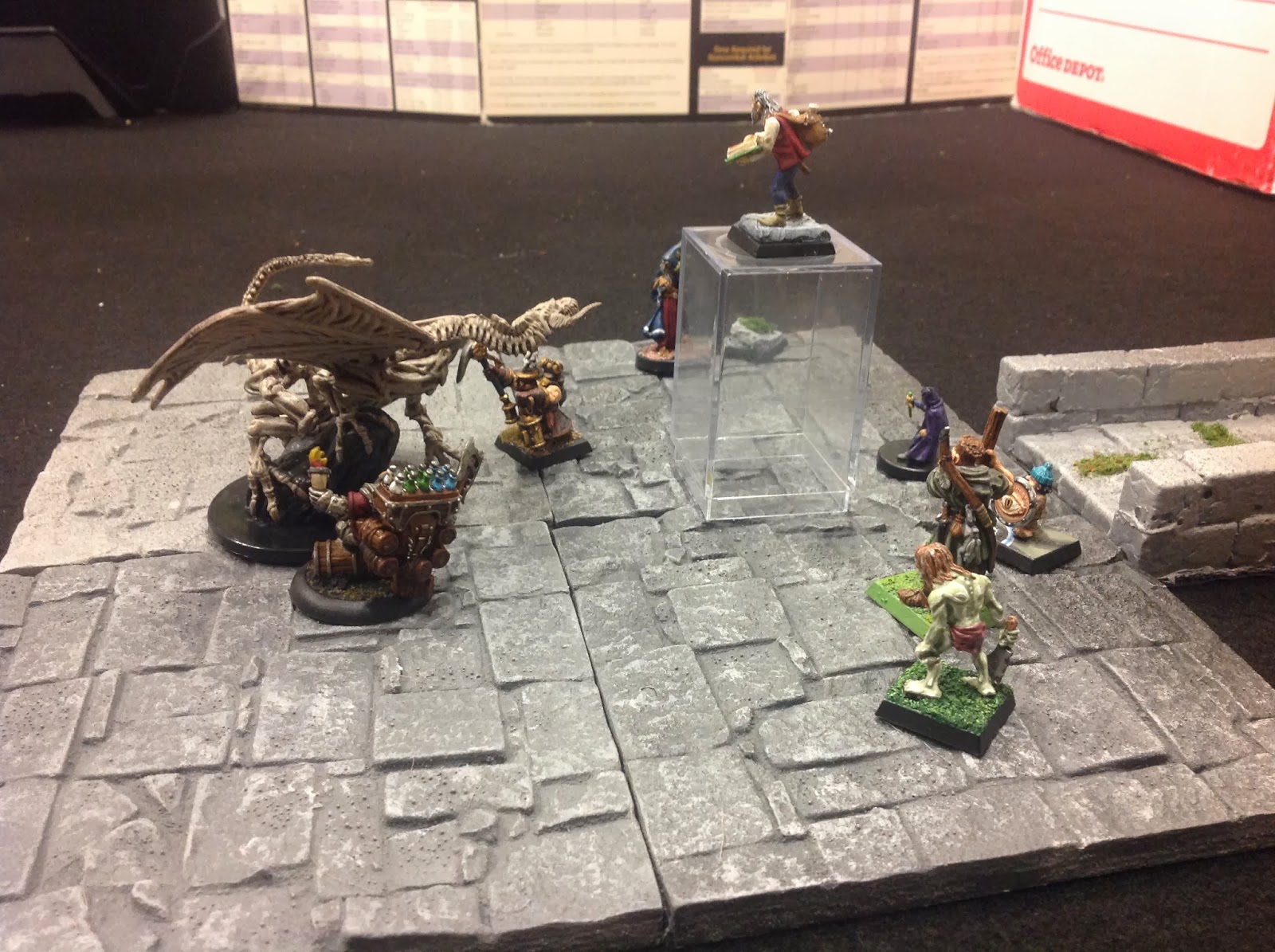 Fight with the Undead Dragon and you can just make out the floating statue of Halaster Blackcloak....oh and my DM screen. The Undead Dragon is a model from the D&D Dungeon Command boxed set....very cool miniature. 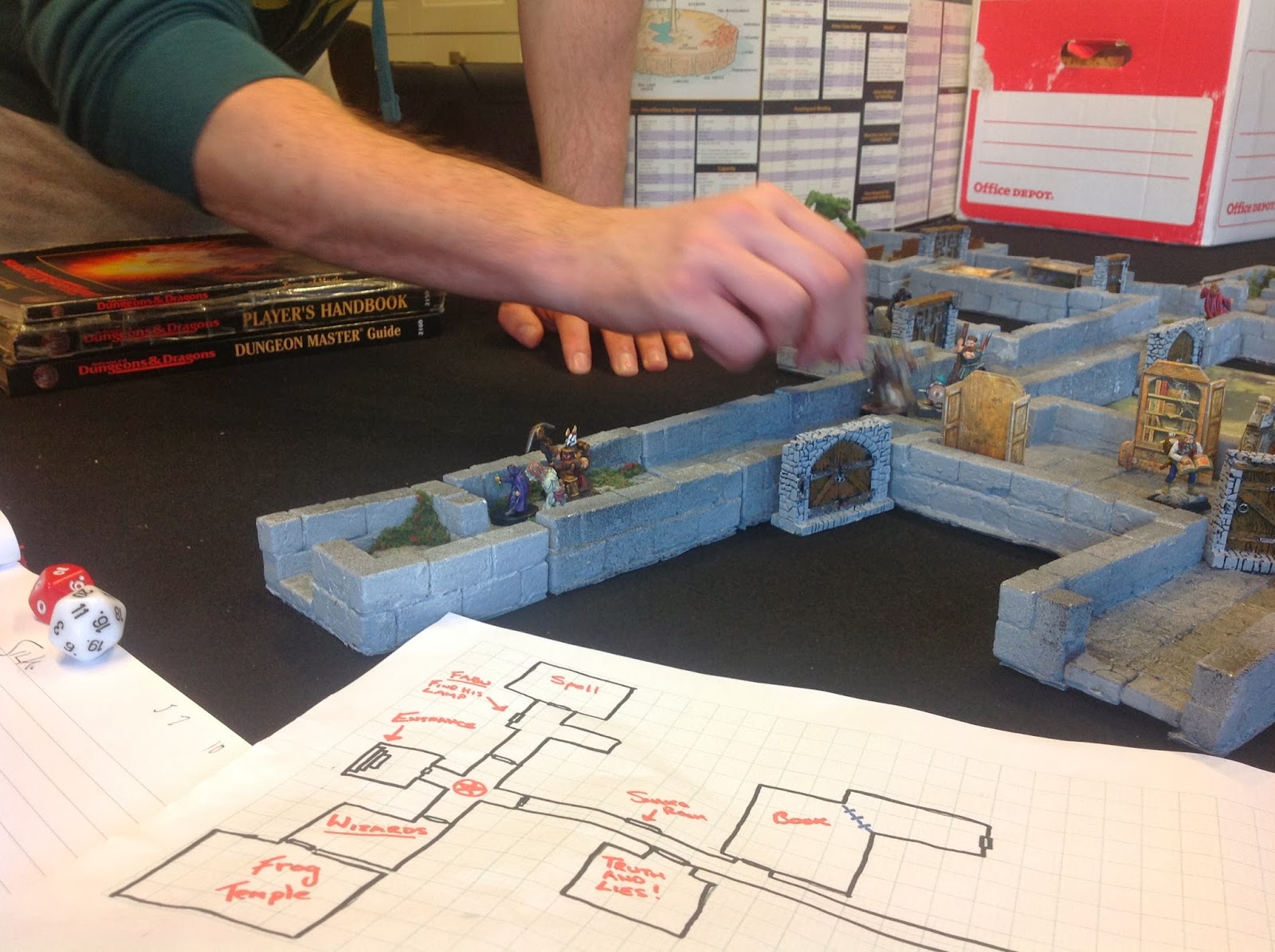 A great picture of my hand and arm.....and it looks like I am either moving monsters around or the party....

Here are a few more pictures of the dungeon from Saturday.
These were taken by one of the players, you can see some of the detail in the second picture of the dungeon walls that I built. 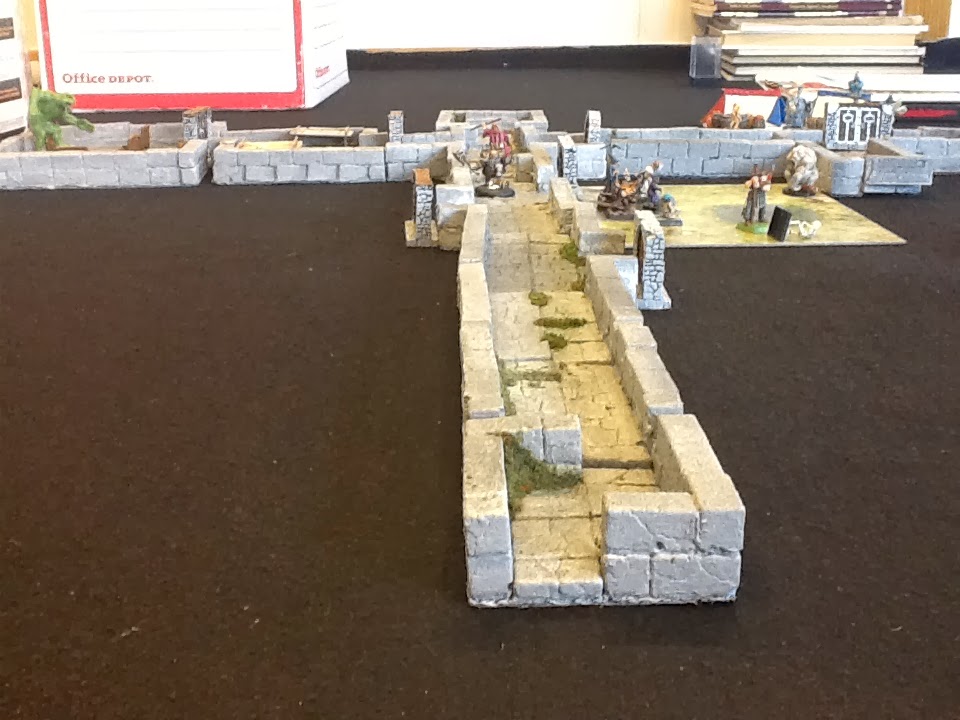 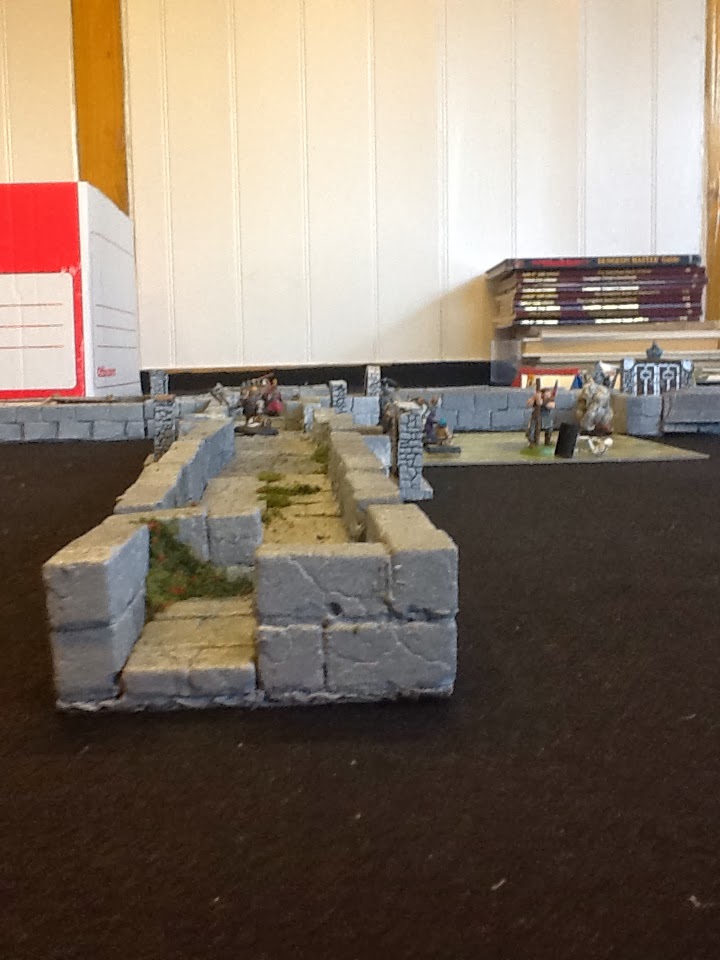 So Ark of the Mad Mage is now done and the fall out of the dungeon is as follows.

No party deaths, but lots of party fun..!
And that's the important thing, as a DM I try to make the dungeons as challenging as possible so that there is a real sense that the parties actions have consequences but I do not like to kill off party members as this will always cast a downer over the dungeon. Obviously if a PC death is unavoidable then hey that's what happens but I like to make sure that everyone has had a good time.

I am waiting for a few new pictures of the final battle between the Jaegers and the Tarrasque to be emailed to me from one of the guys who was playing on Saturday, as soon as they arrive I will post them here.

And as for the future, well we haven'tr discussed when we will next play D&D but I when/if it happens I will be sure to chronicle all of the pre dungeon warm up and the aftermath on this blog.

I hope you have enjoyed seeing the progress of the dungeon on this blog and I hope to write more in the future. If you want to contact me with any questions then please feel free. 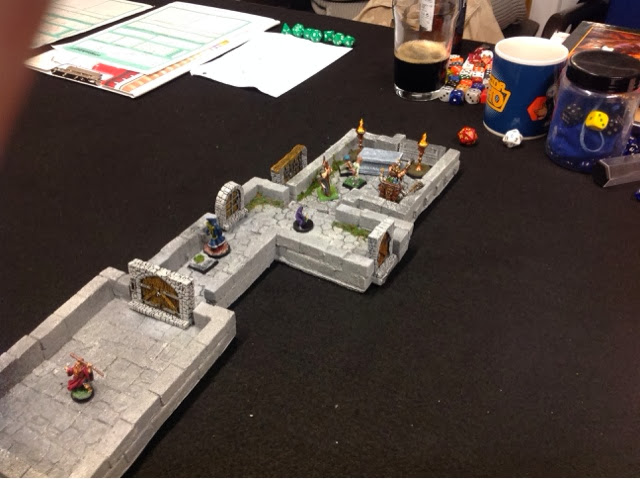 Level 1 of the dungeon 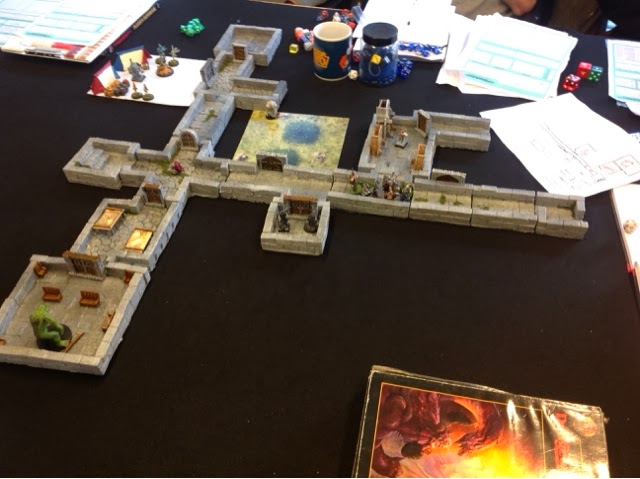