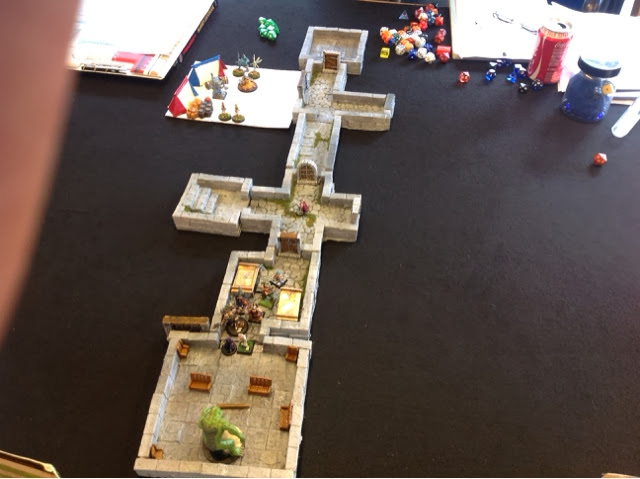 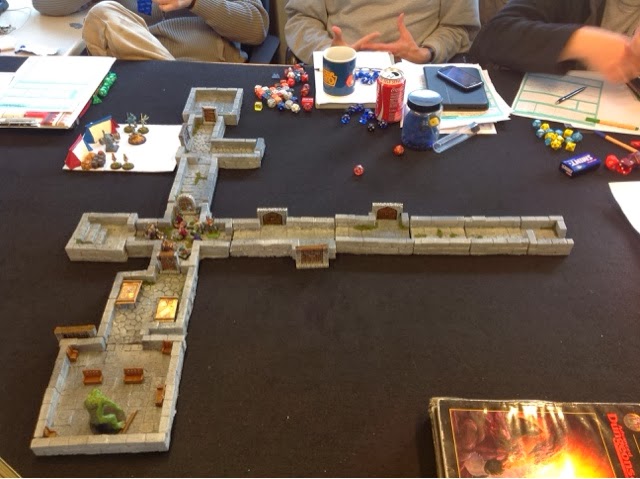 So tomorrow is the "big" day, I've got most of my DM kit packed up and ready to go. I spent a couple of hours last night going through my check list of stuff that I need to take as I am running the D&D game at a friends house.

Years ago before I moved to the south coast of the UK travelling to a mates to play D&D usually only meant taking my dice, writing pad, character sheets and a few £'s for food. Nowadays I have a 50 mile drive to see my mates and as I am now DM'ing ,more than playing I tend to need to take a lot of kit.

As well as all of the models and 3D tiles that I have made and painted I also need to take my big box of books...if you've ever played AD&D 2nd Edition you will know how many supplement books there are....plus I have my Gale Force 9 dungeon mats that I use for generic settings like taverns and city streets. I will also be taking a small amount of WoTC dungeon tiles for use with the dungeon, rooms like the Jungle and Elven glade. I had wanted to make 3D versions of these rooms but I simply ran out of time, if you've seen the pictures of the 3D dungeons that I have posted here you would have seen that some of the room are the regular 2D dungeon tiles. As well as all of that I also have all of my personal stuff as I will be staying over for the weekend at one of my friends houses as I expect this dungeon to take more that one session....fingers crossed most of it will be done during tomorrows session and the rest will be finished on Sunday.

I'm still feeling a bit nervous and excited as this day has seemed to take forever to get here but now all of a sudden it's here and I have to be 100% ready.

As I said in a previous post I will try and update this blog tomorrow in real time as we are playing and I also intend to take plenty of pictures that can be posted here after the dungeon is done.

I'll update this blog again tomorrow just before I leave, which should be early morning as the drive to London where my friends live is about a 1 hour car journey.
at February 28, 2014 No comments:

I don't usually get nervous but the excitement of playing D&D this weekend is starting to boil over a little bit, I am excited at the prospect of DM'ing a cool dungeon but also worried that I have over hyped this and it won't be as good as the idea that I have in my head.

Last night I was thinking that I might be able to update this blog in real time at the weekend as we played, but I doubt if I will have the time for that...I might try and upload some pictures of us actually playing but I can't promise anything right now.

As anyone who has DM'ed before will know you tend to have your hands full when running a dungeon, no matter how much pre-planning that you do the players have a few curves balls heading your way.
at February 27, 2014 No comments:

Quick roll call for the PC's who are adventuring on Saturday.

Emailed reply from my players..

Not if you are a cleric my friend. Fill the vials with healing potions and holy water, polish the mace (the weapon!), prey to your lawful good deity and fasten the binding on you holy book.

So rather a fine day actually. :-)

This is from a friend who is playing a Gnome Speciality Priest of Garl Glittergold.


Obviously from my friend who is playing a human wizard and a kender thief......no word from the thief just yet.!

I thought some good guy took over the city of the dead whats the matter cant he keep his own house in order and needs some stalwart adventurers to do it for him?

Update from the Druid in the party

Gold, sharp axe, blunt hammer, ale
More ale, gold
Even more ale
Evil ? Wot evil ?? Give me a ale
Oooo and some elf scratchings
Who's round is it ? BURP !!!


Any guesses what race of fighters these might be?
Please leave a comment and let's see if you are correct..!!
at February 26, 2014 No comments:

OK, so it's been a few days since I last posted on here and the reason for my absence is related to two things....first of all work..!! and secondly I'm worn out and after spending 8+ hours working on a laptop screen in my office the last thing I need is to spend more time at home doing the same.

Saying that I am eager to keep this blog up to date, so with only 3 days to go before I run my Arc of the Mad Mage dungeon I thought I would quickly post an update.

Firstly the days until Saturday can't go quickly enough, to say that I am super excited to be playing D&D this weekend with my mates is an understatement, secondly I am even more excitable as I can't wait to start rolling some dice and use all of the dungeon stuff that I have been making over the last few months.

I have no idea how many "man" hours I have put in but between the models, 3D dungeon tiles, writing, monsters statting, handout creating etc etc it feels like I have had 2 jobs since well before the new year.

Any way, as of today the party have been updated with a missive from their DM, that's me, with a small snippit of what to expect this weekend.

Shown below is an email that I have sent to all of the players, 4 total player but 6 characters as two of my mates are both playing 2 PC's each.....

Enjoy..
If I get an clean responses from my players via the power of email I will also post them here.

Almost 30 years have passed since Halaster Blackcloak foretold of two terrible events that were set to happen in Faerun.

The first prophecy was the Spellplague, this was an event that caused all magic within the Realms to cease and was caused when the evil God Cyric assassinated Mystra Goddess of Magic.

This event changed the geographic and political landscape of Faerun for many years to come, as well as destroying most magical items and artifacts the Spellplague also caused many spell casters to either die or to become hopelessly insane.

Halasters second prophecy told of a time when peace through Faerun would be destroyed by a unrelenting force of elemental evil and that force would arise from the city of the dead. No other details were given by Halaster as he also succumbed to the Spellplagues insanity and disappeared into Undermountain, never to be seen again.

........the expected date of Halasters second vision is drawing close and life in Waterdeep has become tense, many people are distrusting of strangers and they see portents of destruction at every corner. The city guard has been trebled and most food supplies have grown scarce as people begin to hoard what they can......this is not a good time to be an adventurer.!
at February 26, 2014 No comments: