If you've listened to the WoTC Penny Aracde podcast then you know the truth..! 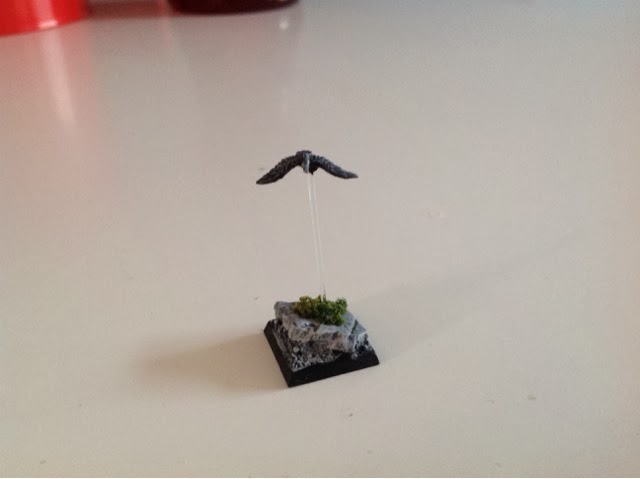 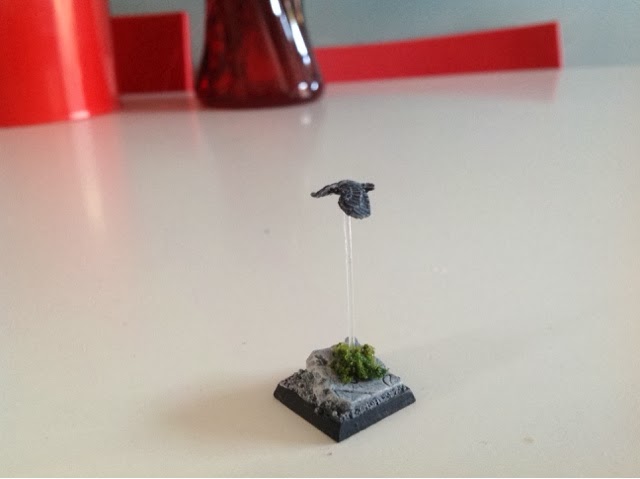 Some more pictures of the doors that I painted for the dungeon, these will be used with the 3D tiles that I built... 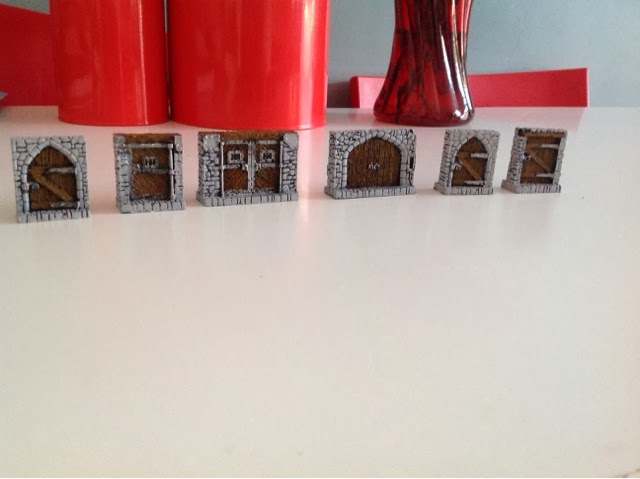 I've finally finished the last of the models, pictured here are two of Fabu's serving girls.

These are both going to be Tieflings, in total I will have four girls but the other two are already painted and in a model box at a mates house so I will have to upload these later. 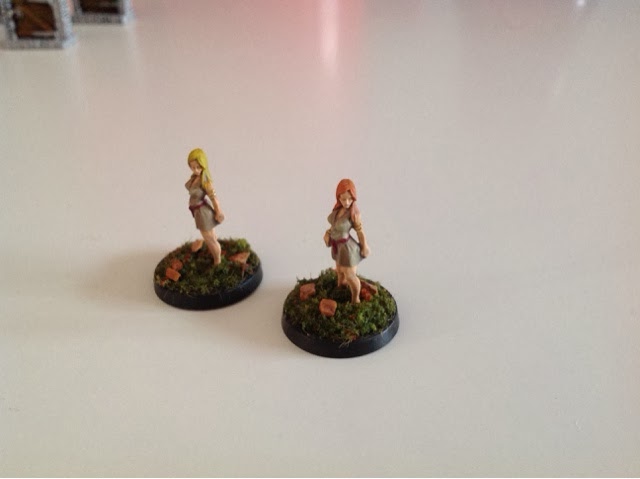 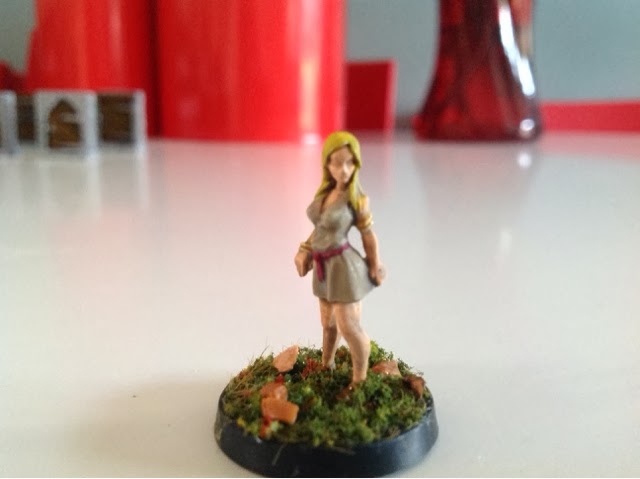 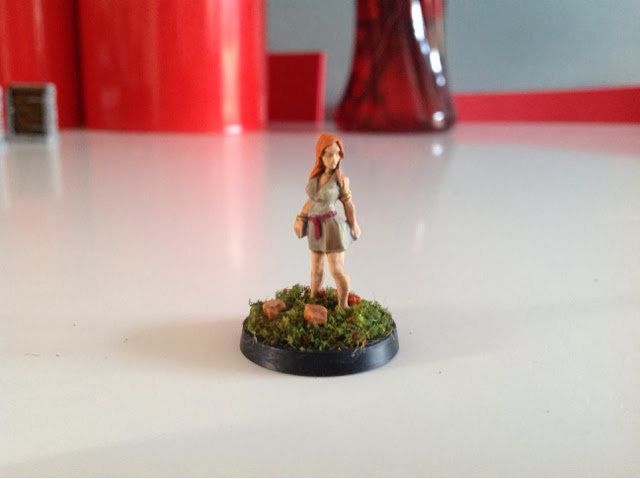 Ark of the Mad Mage - brief

Here is the brief that I have emailed to one of my mates who is playing this dungeon next weekend...I am hoping this will give him enough ideas to get the adventure started.

His character is a human mage (11th level), non specialist.

This brief covers information on two previous dungeons that the party have been involved with recently.

The memories of the excursion to the Plane of Iuz, (Marks Dungeon), are still weighing heavy on your mind, the realization that you were unable to find and defeat the Demi-Lich but that you still survived the Tomb are both comfort and a source of frustration to you.

So with a heavy heart but clear mind you decide to head off into Waterdeep, away from the chatter of your fellow adventurers and to spend some time alone deciphering some scrolls that you found in White Plume Mountain.

You stroll out into a cold yet bright day and decide to take a walk to your favourite library, this large stone building is a place where you have spent many a day in study and you know the building and other patrons well. The library is located in the upper section of the North Ward of Waterdeep, just by the outer wall that protects the city but is also nestled against the lower portion of Mount Waterdeep, this huge imposing mountain still draws a gasp from your when it comes into sight.

As you round the corner of a well trodden road you see the familiar library and you quickly hop across the road and in through the large doors, stopping only briefly to touch the foot of a statue to the Goddess Mystra in a ritual that you have repeated many times.

As expected the dusty, quiet yet familiar interior of the library is mostly empty, the regular librarian nods her head when she sees you and you return her welcome with a warm smile. You are soon settled down in your favourite chair at a large wooden table. From out of a pocket in your robe you produce 3 scroll tubes, these were all found in White Plume Mountain but due to your last excursion you have now had time to transcribe these into you spell book.

With that completed you are about to return the now empty scroll tubes to your concealed pocket when you suddenly realise that one of the scroll tubes still has something inside it. After a quick inspection you notice that the scroll tube in your hand has a concealed false bottom, you prize this open in excitement and from inside the hidden compartment you discover 3 items.

You quickly pull out two more scrolls and a small iron key, the key in non-magical and appears to be for a lock on a door, the first scroll is a deed relating to the ownership of a shop in Waterdeep and the final scroll appears to the a map.

On closer inspection you deduce that the deed is in fact for a shop called "Lashalarts Gowns and Grimoires" and that the document has been signed by an official of the city but where the owners signature should be there is no name or signature. The deed details that ownership of this property is by freehold and that all rent and city taxes are paid for the next 20 years.

The second scroll appears to be a badly drawn map of a subterranean location, but has a magical aura.

What does this all mean.....and why have these items come into your possession?
at February 21, 2014 No comments:

Ark of the Mad Mage update

So the finals parts of my dungeon are being put together this week in preparation for next weekends 2 days of solid dungeoneering...yes I am nervous and yes I am praying to all the gods of Faerun that I haven't forgotten anything.

Saying that though there is only so much prep that you can do for a dungeon and I always find myself ad-libbing through the day anyway, it's amazing that no matter how much you prepare as a DM you always find the need to change or add things to a dungeon on the fly. But that is one of the things that keeps me interesting and enjoy being a DM..

So the final list of things to get ready this week are as follows.

I need to paint 2 serving girl models, these have been bought and I have part painted them this week. I am hopeful that tonight I can finish them off and get the fine detail added. As soon as they are done I will upload some new pictures.

After spending some time planning the layout of the 3D dungeon, (see my previous posts for pictures), I now know that I will need to paint at least another 4 resin doors. At the moment I think I have 10 fully painted and again once the serving girls are done I will crack on with these tonight. I'll post some new pictures of the doors once they are done.

Then that only leaves work to be done this weekend, I need to matte spray paint my Jaegers and the bases that they are on. This shouldn't take too long and I'll be completing the work in my garage as the matte spray paint stinks my house out. Once all of this work is done I will do a couple of "read through" sessions with the dungeon to make sure that I haven't missed anything.

Almost forgot..!!
I managed to find some great new miniatures on the OtherWorld Minatures website and I have bought a set of Wizard Familiar models, I have already painted and based the crow model as I will need this for the 1st level of the dungeon.....nice easy model to paint but it was a real pain to base properly and I am worried that it won't survive the car journey to my mates games room.